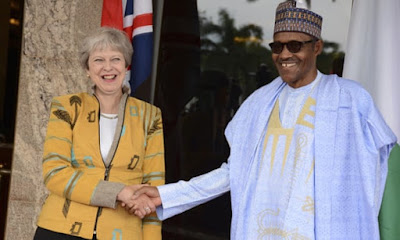 Theresa May has signed a security pact with Nigeria’s president aimed at helping the country combat the militant group Boko Haram through better military training and anti-terrorist propaganda techniques developed in the UK.

The British prime minister’s agreement with Muhammadu Buhari was announced at a summit between the pair in Abuja and billed by the UK as an example of May’s ambition to promote a greater British presence in Africa and support states under pressure from terrorist threats.

“We are determined to work side by side with Nigeria to help them fight terrorism, reduce conflict and lay the foundations for the future stability and prosperity that will benefit us all,” she said.

Billed as the UK’s first security and defence partnership with Nigeria, the pact was the centrepiece of the second day of May’s three-day trip to Africa, in which she will visit Kenya on Thursday having been to South Africa on Tuesday.

The UK will provide training to the Nigerian military to help it contend with improvised explosive devices used by Boko Haram, and has offered to help train full army units, as opposed to individual soldiers, before they are deployed in the country’s north-east, where the Islamist militant group has its base.

It also hopes to cut the flow of new recruits by working with local communities “to push out counter-narratives” to Boko Haram, drawing on the UK’s experience of “countering terrorist propaganda at home”, according to the pact announcement. An additional £13m will be spent on an education programme for the 100,000 children living in the conflict zone.

May told Buhari the UK wanted to support Nigeria’s stability and said it was important their joint work on security was undertaken in line with international standards on human rights. The prime minister added that she endorsed the country’s efforts to combat illegal migration and modern slavery.

The British prime minister then travelled to Lagos, where she was greeted with several outdoor hoardings bearing her name. May switched tack to promote Britain’s expertise in financial services while seeking to emphasise future trade possibilities, in a week when she had called for the UK to become the leading G7 investor in Africa by 2020.

She met Aliko Dangote, one of the country’s wealthiest men, who has already agreed to list his $10bn (£7.7bn) cement business on the London Stock Exchange.

Thursday’s trip to Kenya will see May announce that the UK will build a cybercrime centre in Nairobi to help bring prosecutions against paedophiles in the east African nation.

The day-long visit will include a meeting with the country’s president, Uhuru Kenyatta, and a press conference.

Kenyan authorities are not able to receive reports of child sexual abuse material from US technology companies because they say the country does not have the secure channels of communication needed. The UK’s National Crime Agency has already worked with Kenya’s anti-human trafficking and child protection unit in several investigations, securing prosecutions in 2015 and 2018 of British men who had sexually abused Kenyan children.