Victor Moses of Nigeria retires from international football at 27 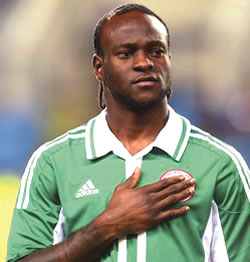 Nigeria's Victor Moses has announced his retirement from international football at the age of 27.

The Chelsea winger played 37 times for his country, scoring 12 times since making his debut in 2012.

He had previously represented England up to Under-21 level, while coming through the ranks at Crystal palace.

"I have experienced some of the best moments of my life wearing the Super Eagles shirt and have memories with me that will last a lifetime," he said.

"However, I feel that now is the right time to step away in order to be able to focus fully on my club career and young family, as well as to allow the next generation the opportunity to step up and to flourish.

"Thank you for the memories and good luck to the team for the future."

Nigeria were knocked out at the group stage in Russia this summer, having beaten Iceland but suffered defeats by Croatia and Argentina.