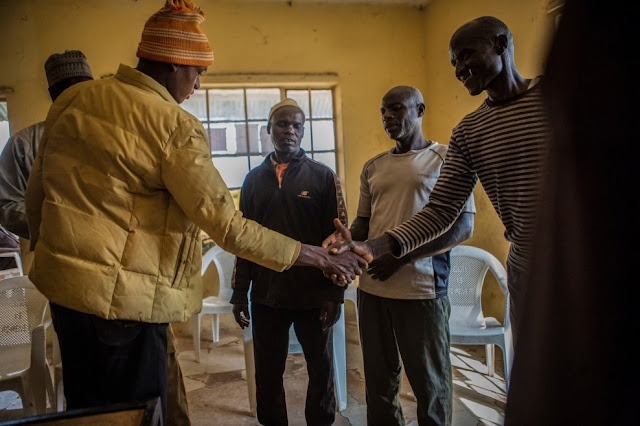 Farmers and herders once lived harmoniously on Nigeria’s bucolic central plateau, but when Amos Lenji, a farmer, caught a young herdsman grazing cattle in his cornfields this October, he feared for his life.

His fear was rooted in a massacre that took place in June. More than 200 people, mostly farmers, were slaughtered by a gang of masked men dressed in black who marauded through the county of Barkin Ladi. Although no one was apprehended, the killers are suspected to be herdsmen.

It was the biggest bloodbath yet in a cycle of retaliatory killings between farmers and herders competing for space across Nigeria’s hinterlands. At least 1,300 were killed in just the first six months of 2018, according to the International Crisis Group. That is more than six times as many as were killed in Nigeria in the same period by Boko Haram, one of Africa’s deadliest terrorist groups.

Nigeria’s population has grown exponentially and is projected to surpass the United States’ by 2050, although Nigeria is 11 times smaller in area than the United States. Amid the boom, land has become increasingly scarce, and disputes over ownership are frequently turning bloody. New generations of farmers are planting on land traditionally used for grazing, and out of desperation, herders are grazing their cattle in fields still full of crops, destroying harvests. Many in the two groups now see each other as existential threats.

The near-constant violence has catapulted the farmer-herder crisis to the top of an already long list of security concerns in Nigeria. The country is roughly half Christian and half Muslim, and because farmers tend to be Christian and herders tend to be Muslim, the crisis has worsened the friction between the two religious communities. So far, Nigeria’s government has shown little capacity to prevent the fighting from spiraling further.

In the absence of an effective government response, locals have cobbled together groups of peacekeepers who have become the plateau’s de facto law enforcement. Barkin Ladi’s vigilantes, as they’re known, are particularly effective because they include farmers and herders. Bitrus Dung Pam, the local group leader, says he commands 30 times as many recruits as there are police in the whole county.

“When people see us, they trust us,” Pam said. “It’s not like the army or the police. We are the community.”

Pam was who Lenji thought of, standing there in the cornfield. He picked up his cellphone and asked for immediate help. The herdsman ran away.

“I had no other option,” Lenji said.


‘Vigilantes are our eyes’

Nigeria’s police and security forces are underequipped, underpaid and often deployed to unfamiliar areas of this diverse country of almost 200 million people.

Vigilante groups have proliferated out of necessity. They have formed a national umbrella organization that says it has nearly 350,000 members. They fill a giant law enforcement vacuum, but they also represent a homegrown approach to peacekeeping.

They build trust by settling not only potentially explosive disputes between farmers and herders, but also smaller ones. The process often resembles a court proceeding. On a recent day, vigilantes spent hours smoothing out a disagreement over money among women trying to raise chickens collectively.

The volunteers are everyday people, mechanics and bricklayers, men and women, and Muslims and Christians, and they represent all the plateau’s ethnic groups, including the two largest, the Berom and Fulani. Most farmers here are Christian and Berom, while most herders are Muslim and Fulani.

That inclusiveness commands the respect of local officials.

“No one will accuse them of being partisan or conniving with one tribe against the other,” said Yakubu Dati, a spokesman for the state government. “That is what we want, that is what this administration is all about, and we are doing everything to encourage other vigilante groups to emulate that so that peace can return permanently.”

But that doesn’t translate into any tangible state assistance. The volunteers pay for their own uniforms, and they carry hunting rifles and rubber pellets from home. In Barkin Ladi, they coordinate their patrols from donated office space in a small house and have just one vehicle.

They maintain a heavy presence along backcountry roads and man dozens of checkpoints in spots where violence has flared in the past. Since many are guarding their own villages, they simply walk to their posts. They are everywhere the police are not.

“If you call the police, they may tell you, ‘We don’t have fuel, give us some, and we will help you,’ ” said Edward G.M. Bot, the traditional leader of Barkin Ladi’s Berom community. “It is not like that with the vigilantes. The level of determination is totally different. They show up immediately. They stay overnight. They know who we are.”

Maj. Gen. Augustine Agundu, who commands Operation Safe Haven, the Nigerian military’s response to unrest on the plateau, said the volunteers were essential to his mission. The military, police and even aid groups have organized training for them, and Operation Safe Haven coordinates some of its patrolling activity with them.

The Nigerian government has struggled to come up with a comprehensive policy to address the crisis. In some states, grazing has been banned entirely, while in others, herders have been asked to move their cattle to ranges set aside for them. On the plateau, the main policy seems to be Operation Safe Haven’s military intervention and tacit support for the community-led effort.

“The vigilantes are our eyes,” Agundu said.

The violence between farmers and herders is Nigeria’s deadliest, but it is just one of three major conflicts exposing the fraying social fabric in this country.

For a decade, Boko Haram has terrorized the northeast, killing tens of thousands, burning entire villages and kidnapping an untold number of children. And in the Niger Delta in the country’s south, guerrilla groups continue to target foreign oil companies and the government, slowing Nigeria’s oil-dependent economy.

All these crises have led local communities to arm themselves against perceived enemies, while in the background, gargantuan challenges such as rapid population growth, climate change and religious rivalries deepen.

On the central plateau, Berom farmers are in the majority. Many believe that they are indigenous and that nomadic Fulani herders are either interlopers or invaders. The same dynamic is playing out across semiarid parts of Africa, but most violently here, where the plateau’s edges seem to provide a closed arena for battle.

“I won’t be sad if all the Fulani leave this place,” said Rose Mashinging, 36, a farmer who lives in a village that was attacked in June. “It is Berom land anyhow.”

The polarization has penetrated Nigeria’s politics. The country is set to hold a presidential election in February, and many in the mostly Christian south accuse President Muhammadu Buhari, an ethnic Fulani, of siding with herders.

His predecessor was voted out partly because he was perceived as weak against Boko Haram. Buhari’s reelection will partly rely on convincing skeptics that he is serious about peace in the Middle Belt, an ethnically diverse band across the country that is home to Nigeria’s Federal Capital Territory, though his government has done little to intervene in the conflict so far.

On the plateau, Fulani leaders say that members of the state security forces, who are mostly Christian, actively discriminate against the herders, and the leaders also allege that security personnel have engaged in revenge attacks. (Agundu, the commander of Operation Safe Haven, denies those charges.) Local ardos, or Fulani traditional headmen, complained that police don’t take cases they file seriously. And reports of Berom farmers stealing cattle are common, and the subsequent clashes often result in the deaths of herdsmen.

“It is a mess of poisoned relationships — layers of grievance that accumulated for generations are exploding,” said Adam Higazi, an anthropological researcher at the University of Amsterdam who has been based on the plateau for more than a decade. “Most people on the plateau don’t think of anything else now except the animosity.”

‘They can’t save us’

The vigilantes’ biggest hurdle is that they don’t have the strongest tool available to state law enforcement: lethal weapons. Without them, they can be easily overrun by the kind of marauding gang that terrorized Barkin Ladi in June. With such weapons, however, they might become more like soldiers or bandits themselves and be implicated in the killings.

Idris Gidado, the ardo of the villages worst affected in June, said that he would ordinarily commend the civilian peacekeepers for their bravery but that a recent incident had disillusioned him.

A Fulani man from Gidado’s own village had robbed a family of farmers. The volunteers caught him and handed him over to the police. The police released him quickly, and the ardo suspects that money was exchanged. The man robbed another family, and the sequence of events was repeated. In late October, the man raped a woman in his village, the ardo says.

“We want the vigilantes to succeed,” Gidado said. “But there is no system of justice here to allow that.”

The local police commissioner, Austin Agbonlahor, said he did not doubt the ardo’s story, but he said no formal complaint had been lodged.

Most of the tens of thousands of people who have been displaced by the fighting are too fearful to return home. Maren Zachariah’s entire village, Garwaza, was abandoned in June. Garwaza was ransacked by the attackers, and its central church — with its fresco of Jesus and painted map of Africa — was left gutted and burned. It has been colonized by thousands of bees.

“We want to return, but the government doesn’t provide security. They only come as far as the nearest town. And our vigilantes can warn us, but they can’t save us,” Zachariah said. “The big trouble started on a sunny day like today. It can happen again any time.”

Amid the distrust, Barkin Ladi’s multiethnic vigilantes are setting an example for peaceful coexistence.

Mangwei Mashinging, the brother of the farmer who wishes the Fulani would leave the plateau, said he thinks peace is possible. That is why he joined the volunteer group.

“We thank God for the Fulani,” he said. He says Fulani neighbors saved many farmers during June’s massacre. “It is not as if the world is so simple — that Fulanis are bad and Beroms are good. Both groups have both kinds of people. We have to be on the side of peace.”

In October, when the vigilantes brought together Amos Lenji, his farmer neighbors and the family of the herdsman whose livestock trampled their cornfields to discuss compensation, everyone was a bit surprised to find out that the opposing parties shared close family friends.

The tension lifted. The farmers proposed that instead of paying for the damaged crops, the herdsman’s kin pay their mediators for fuel to keep doing their work. The two sides shook hands and headed home.

This project was supported by a grant from the Pulitzer Center.