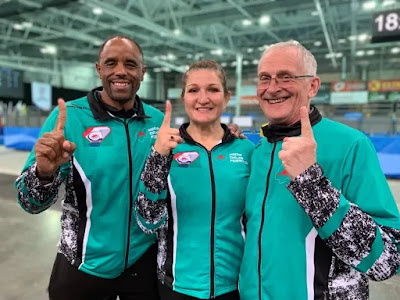 It was a curling celebration unlike any other.

They hugged. They yelled. They threw their hands in the air.

For the first time ever, an African nation had won a curling game at a world championship.

"Nigeria we did it for you," Tijani said. "I'm over over-the-top happy, elated, excited."

The fans inside Sormarka Arena erupted in applause. Even some of the curlers started clapping too.

"All of our hard work has paid off. We did it," Susana said.

Tijani and his wife Susana live together in Denver where they started curling for the first time three years ago.

Tijani's family comes from the south-central Nigerian city of Onitsha. His love of sport and love of country has been an integral part of his life — so when he found out there was an opportunity to compete on the world stage in a sport, he jumped at the opportunity to curl.

"Watching it on the Olympics over the years was motivating for me and my wife. We're both athletes and competitors," he said.

The two have been training relentlessly over the past year for this world championship. They so badly wanted to win at least one game for Nigeria — and in their final game of the event they did it. And when it happened, there was an outpouring of emotion.

"What a great dream to share this with your best friend, my wife," Tijani said. "You go through so many trials and tribulations. It's been a long journey."

At times throughout the world curling championship there have been a lot of frustrating times on the ice, including a 20-0 loss to the Czech Republic.

But they were able to put all of their valuable learning lessons into practice to defeat France.

"To all of my friends in Nigeria and the entire Nigerian Curling Federation, thank you so much," Tijani said.

His wife echoed Tijani's praise for those who helped them achieve this first-ever win.

"Thank you for believing in us," Susana said.

At the end of the on-ice celebration after their victory, Tijana and Susana then turned to the bench behind them to salute their coach.

Ellery Robichard is a Canadian curler and coach based in Moncton, N.B. He holds a yearly summer curling clinic and that's how he first connected with Tijana and Susana.

It's been a long, challenging learning process for the Nigerian curlers but the victory Thursday made it all worth it for Robichaud.

"It's as if I won the Brier. For them it's quite an achievement," Robichaud said.

"You saw how happy there were. I don't see people win the Brier and be as happy as them. You get the feeling from there. The energy from them."

Robichaud says Nigeria's victory over France is one of top moments in his curling career — he's spent his life at curling rinks.

"It's a reward for the headaches of coaching," he said. "It can be frustrating sometimes. The rewarding part of today was they got it. They placed the rocks. They put it together."

Tijani couldn't stop raving about Robichaud after the victory.

"We have one of the greatest coaches in the world," Tijani said. "He knows our temperaments. He knows how to communicate. And he believes in us."

And maybe now after this first-ever curling victory Nigerians believe just a little bit more about their future on the pebbled ice.

"Even before the victory we had already won being here," Susana said.