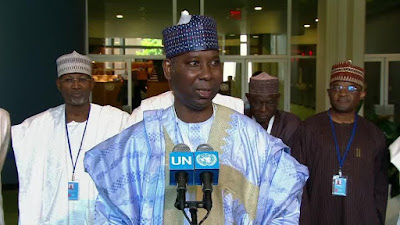 He becomes the 74th holder of the position taking over from Ecuardorian María Fernanda Espinosa Garcés whose tenure ended with Muhammad-Bande’s election.

Going by established principle of geographical rotation and relevant UN resolutions, the Presidency of the 74th session had reached the trun of Africa, hence Mohammad-Bande’s election was widely expected.

The immediate past president – the fourth woman to be elected to the post in the history of the world body – took office on 5 June 2018. She was also the first since woman 2006.

Having been formally nominated by the Nigerian government for the position, the then nominee went through informal interactive dialogues with the view to increasing the transparency and inclusivity of the process. The dialogue took place on 13 May 2019, at UNHQ, New York.

The last time Africa held the presidency was in 2014/2015 when Uganda’s Sam Kahamba Kutesa led the 69th session. Aside the normal sessions, the UNGA also calls for special and emergency special sessions that usually have different presidents.

About the Ordinary Sessions and its president

The General Assembly meets annually in regular session, intensively from September to December, and resumes in January until all issues on the agenda are addressed – which often is just before the next session starts.

Shortly after his/her election, the President-elect sends a letter to all Member States announcing the theme for the upcoming general debate and inviting them to focus their speeches on the proposed theme.

The General Assembly is one of the six main organs of the United Nations, the only one in which all Member States have equal representation: one nation, one vote.

All 193 Member States of the United Nations are represented in this unique forum to discuss and work together on a wide array of international issues covered by the UN Charter, such as development, peace and security, international law, etc.