The Hushpuppis And Nigeria’s Image 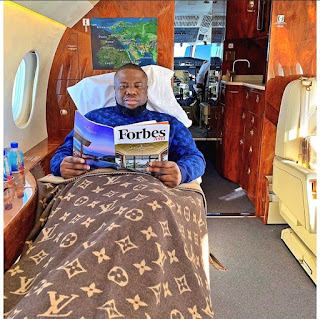 The arrests of Ramoni Igbadole Abbas, commonly known as Hushpuppi; Jacob Ponle, known as Woodberry; and ten others last month by the expert combination of the FBI, INTERPOL, and the Dubai police in the United Arab Emirates has reopened the unpleasant conversation about international cybercrimes. It has equally re-centered the issue of Nigeria’s image vis-à-vis crime and the most populous African nation’s citizens.

According to official news sources, at the time of the 38-year-old’s arrest, Hushpuppi had victimised over 1.9 million people, 21 laptop computers, 15 memory storage devices, 5 hard drives, 47 smartphones, and 15 flash drives. Investigators announced that he, alongside his aids, defrauded people up to the tune of $435,611,200 (N169.01 billion) based on documents recovered to indicate fraudulence “on a global scale.” Did I mention that he was the owner of 13 luxury cars worth up to $6,806,425 (N2.640 billion) too?

It is erroneous to assume that Hushpuppi’s case is isolated. The pattern and frequency prove otherwise; they show that the menace is not only endemic, but extensive. Last year, much-celebrated Forbes Africa’s 30 Under 30 2016 honoree and chairman of Invictus Group, Obinwanne Okeke was arrested and recently pleaded guilty to FBI charges for $11 million (N4.2 billion) internet fraud facing up to 20 years imprisonment sentence; in August 2019, the FBI released a list of 80 wanted Nigerian cybercriminals for an alleged $6 million cybercrime noting that “the overall conspiracy was responsible for the attempted theft of at least $40 million,” while arresting two co-conspirators: Valentine Iro and Chukwudi Christogunus Igbokwe; 6 Nigerian nationals—Richard Izuchukwu Uzuh; Alex Afolabi Ogunshakin; Felix Osilama Okpoh; Abiola Ayorinde Kayode; Nnamdi Orson Benson; and Michael Olorunyomi—are currently on the FBI’s “Cyber’s Most Wanted” list for defrauding “over 70 different businesses in the US with a combined loss of over $6,000,000” according to its official twitter account.

Underlying all these cases is a certain measure of self-indulgence which seeks to exploit the efforts of innocent victims, capitalising on codified methods of cybercriminality frowned upon by international laws, and counterproductive to the image-building goals of Nigeria. Acts such as phishing, engaging in Business Email Compromise (BEC), ransomware, banking malware and other widely recognised cyberthreats have been at the forefront of their activities.

Following Hushpuppi’s arrest, social media platforms began witnessing a sense of distancing. But unlike the social distancing globally induced by the Coronavirus Disease (COVID-19), we became accustomed to social media distancing initiated by those who had once dined with the overtly brash Hushpuppi. More importantly though, the often-repeated lines of denunciation by Nigerian public officials greeted our airwaves as expected. The central message was the same as always: ALL Nigerians should not be lumped into the soiled perception of fraudulence, uncharacteristically championed by most recently arrested infamous nationals like Hushpuppi, Obinwanne, Mompha and their ilk.

“This is really denting to our image as a people, but like I always say, fraud does not represent who we are as Nigerians. Hardworking. dedicated. committed,” the Chairman/CEO, Nigerians in Diaspora Commission (NIDCOM), Hon. Abike Dabiri-Erewa retweeted to a tweet detailing Hushpuppi’s fraudulent acts on June 25, 2020. Public relations messages like the one by Hon. Dabiri-Erewa are, perhaps, important in the fight to redeem Nigeria’s already battered image—somewhat reminiscent of the late Information Minister, Prof. Dora Akunyili’s campaign: “Nigeria: Good People, Great Nation.” However, they reek of gross unexamined self-reflection in many forms. And I will highlight some.

First, at face value, these cybercrimes committed by Nigerian nationals portray a certain get-rich-quick syndrome which has become a deified, noticeable trend mostly exhibited—to varying degrees—across social media platforms. Exotic cars are flaunted, designer wears rocked, glittering accessories are customary looks across verified pages and profiles, as if to separate those that have “made it” from those trying to stay as legitimate and clean as the strength of their manhood and the integrity of their professional crafts entail. That these self-acclaimed “made men” have millions of followers on their social media accounts portrays the alternate universe we live in, where the disenfranchised see them as role models to aspire to become. Yet, there is a profound truth to be gleaned from this aforementioned syndrome.

On deeper observation, it epitomises the present spirit of Nigeria’s younger generation. In terms of age structure according to the 2019 CIA World Factbook, Nigeria’s “early working age” and “mature working age” boast a population pyramid combination of 15-24 years (19.81%) and 25-54 years (30.44%). That equals a combined 50.25%. To put it differently, a 2020 pew research notes that only 5% of Nigeria’s population is 60 or older with a median age of just 18. In other words, 95% (or 195,700.000) of Nigeria’s 206 million population is under the age of 60—a rather astronomical figure that has been failed by the Nigerian experiment with no hope in sight.

The loss of hope in a nonexistent socioeconomic structure is a direct indictment of Nigeria. As Chinua Achebe aptly quips, it is a reiteration of “a failure of leadership.” Admittedly, this does not cloak the blame due these few fraudulent Nigerian nationals. Integrity is an intrinsic, conscious value to be continually upheld as a self-guide by every individual regardless of external forces of failure. To blame the vices of evil without highlighting the deepening failures of governance across all dynamics though, is to be selective about the realities of our normative socioeconomic and political truth.

Secondly, that the indictments of these cyber-criminals have been executed by such international law enforcement bodies like the FBI, INTERPOL, and the Dubai Police Force, reiterates our perceived views about the interests and mandates of the anti-graft commission. It exposes the failures of Nigeria’s national anti-crime agency, the Economic and Financial Crimes Commission (EFCC), again, making a mockery of the nation’s image as one only interested in selectively fighting against crime.

Since the Commission’s creation in 2004 to “prevent, investigate, prosecute and penalise economic and financial crimes and is charged with the responsibility of enforcing the provisions of other laws and regulations relating to economic and financial crimes,” its results have been, to put it bluntly, abysmal. In May 2018, the EFCC’s Head, Media and Publicity, Mr. Wilson Uwujaren claimed that the Commission had, within three years of President Muhammadu Buhari’s administration, secured 603 convictions: 103, 195, and 189 for 2015, 2016, and 2017, respectively. He also claimed that the Commission had recovered about 500 billion naira in Nigeria’s embezzled commonwealth. Fast-forward to this year’s Democracy Day, June 11, while speaking at a press conference, the Acting Chairman of the EFCC, Ibrahim Magu noted thus: “Our scorecard in the area of conviction is 2,240 in the last five years and we recovered assets in excess of N980 billion, with quite a large array of non-monetary assets.”

As at the time of writing this piece, Ibrahim Magu has been arrested by the Department of State Services (DSS).

Juxtaposing these “recovered” stolen funds with the 2018 Brooking Institution report that every minute, six people in Nigeria fall into extreme poverty—defined by the United Nations to mean those who earn $1.90 (a meagre N760) or less daily—is a tough task. In the same year, Nigeria would become the “poverty capital of the world” overtaking India—a nation with more than six times its population size—and is set to remain so for the next generation. That we have reportedly recovered N980 billion ($2,529,977,800.00) under the present administration by the EFCC alone, even as Nigerian fall into extreme poverty, is almost unimaginable. There have also been allegations of Magu “relooting the loots”—a codified notion that the recovered funds have been used for personal gains instead of being reimbursed into the coffers of Nigeria’s commonwealth.

Supposing we even ignore these random convictions and focus on the assumed big fishes as my curiosity suggested during the writing of this piece, my inquiry into the most sensitive cases betrayed hope as well. Of all 43 cases termed “high profile cases being prosecuted by the EFCC” as shown here with the earliest dated 2007, only four (a measly 9.30%) of the cases have been “dismissed.” A massive 39 of the cases (90.7%) are still “ongoing” or have “commenced” including those on “interlocutory appeal at the Supreme Court.” The perception is thus that Nigeria’s anti-crime agencies are mere watchdogs for political witch-hunting, readily available and only potent against targeted individuals and organisations.

This endemic betrayal of trust in the Nigerian system and the astronomical surge in cybercrimes by its nationals, have come at a grave cost to Nigeria’s international image. 419—the section of the Nigerian Criminal Code—is now an emblem of our economic and financial realities. Cybercrime is now an automatic indictment of both the average Nigerian and Nigeria’s character, just as our comatose international image lies critically at the selective mercy of western propaganda. It has equally fostered an unconscious guilt we have to bear across all international institutions as Nigerians. And its implications have been even more damaging: our emails are rejected; our notices for denial are stamped with imperialist prejudice; our visa applications—whether for tourism, work, or studies—are denied with reckless abandon; our green international passports are treated with utter disdain. We are judged based on our perceived unscrupulousness than on the merits of our individual characters. And even when meritorious acts are associated with the Nigerian nationality, there is the preconceived idea that an ill must have contributed to the outcome. Through it all, no iota of success or failure of the Nigerian is without the asterisk of potential criminality.

Thankfully, international anti-crime agencies have been successful in fishing out these hoodlums and charging them appropriately. However, what does not fall under the jurisdiction of INTERPOL, FBI, or any other anti-crime agency is the urgent need to redeem Nigeria’s image. To do this, is to reexamine the erroneous one-way-street perception of criminal acts, which is to call out the failures of both the leaders and the led. To do this, is to admit the failed Nigerian socio-economic and political systems, and to rebuild them on the foundations of integrity, transparency, truth, and justice. Until we do so, the Hushpuppis and Obinwannes of our existence will continue to dent our collective image with their cybercriminal acts. Until we do so, others will continue to look up to these criminals as role models and answers to the questions Nigeria fails to address.

Eleanya Ndukwe Jr. is a sociopolitical critic and graduate student of Political Science at California State University, Los Angeles majoring in Global Politics. He writes from Los Angeles. Follow him on Twitter @The_New_Mind