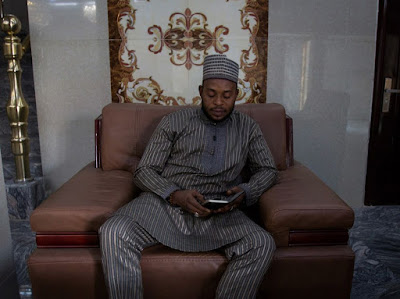 Depending on your feelings about Bitcoin, it may seem appropriate that Nigeria’s love for the cryptocurrency began with a scam. Mavrodi Mondial Moneybox (MMM), a 30-year-long global Ponzi scheme that began in Russia, roped in millions of Nigerians from late 2015 to the end of 2016 with promises of 30 percent returns in as little as 30 days. When the government began to crack down on bank accounts linked to the scheme, MMM’s operators cut the banks out and started requiring victims to use Bitcoin. By the time MMM suspended its payouts, shortly before Christmas 2016, it had robbed an estimated 3 million people in Nigeria—where the per capita annual income is less than $3,000—of $50 million.

It had also convinced many of them that, the scam notwithstanding, Bitcoin was the future. “It was MMM that made Nigerians understand how Bitcoin worked,” says Lucky Uwakwe, co-founder of Blockchain Solutions Ltd., a cryptocurrency consulting firm in Lagos. Today, Nigerians are trading about $4.7 million in Bitcoin a week, Uwakwe says, up from about $300,000 per week a year ago. That’s No. 23 globally, according to researcher CryptoCompare—far below the more than $1 billion traded daily in U.S. dollars or Japanese yen, but comparable to the volume of activity in Chinese yuan or Indian rupees. “The growth has been crazy,” says David Ajala, who runs NairaEx, one of about a dozen digital currency exchanges in Nigeria. “It took us two years to get 10,000 customers. Within the last year, we’ve added 90,000.”

The scams have kept pace. Phony traders have flooded Nigeria’s cryptocurrency exchanges, messaging apps, and even the streets of Lagos and other cities, promising people fast money and disappearing once they’ve taken theirs. “A lot of people have had their fingers burned,” says Adeolu Fadele, founder of the Cryptographic Development Initiative of Nigeria, a group that aims to educate regulators and the public about digital currency.

The scams follow a pattern familiar to anyone who’s ever received a message from a supposedly beleaguered Nigerian prince: The target is asked to wire over naira, the local currency, in exchange for Bitcoin. In some cases the scammer uses the name and photo of a real dealer and creates a trading profile on a local exchange that’s good enough to pass a cursory background check, a technique known as cloning. Others will make an offer not of Bitcoin, but of “billion coin” or some other nonexistent cryptocurrency. “Everybody I know has been scammed in one way or another,” says Bashir Aminu, a digital-security expert and Bitcoin enthusiast in Lagos.

So Nigeria, unlike other Bitcoin hubs, has begun to develop informal groups of traders who take an old-school approach to verifying transactions. After several friends of Aminu’s lost thousands of dollars to scammers between them, they set up an informal exchange on the messaging app Telegram, trading among themselves. When other friends sought to join the group, Aminu would review their identification and banking documents—comparing passports and papers with the faces in front of him. Sometimes he’d even act as a trusted broker, holding a buyer’s money in escrow until the seller came through with the Bitcoin transfer. Over the past year, he says, his group has grown to almost 800 members. There are dozens of similar networks, Aminu says, with varying degrees of security procedures. Some arrange face-to-face meetings in homes, the backs of small shops, and other private places, where a buyer hands over hard cash and watches the seller make the Bitcoin transfer on a smartphone.

This sort of facilitator is essentially a digital aboki, the kind of black-market money-changer who lurks outside high-end Nigerian hotels to swap plastic sacks full of weather-beaten naira for stacks of $100 bills and euros. As these informal Bitcoin-centric networks grow and multiply, Aminu says, they’re increasingly populated by people who trade digital currency as a full-time occupation. Because of all this informal trading, the size of Nigeria’s market is probably much bigger than what the public exchanges report, says Uwakwe, the consultant.

Aminu says the occasional scammer still sneaks into his Telegram network, and he recently booted more than 100 people he deemed untrustworthy. For many, the potential profit is too good to pass up, says “Ambassador” Smart Oluwadola, a cryptocurrency peddler in Kano, a desert city in the north. In August a friend persuaded Oluwadola to ditch a job hawking health supplements for a suspiciously pyramidal Philippine “business club” and buy a couple hundred dollars’ worth of Bitcoin. Now he’s an evangelist, with thousands of dollars’ worth, a local radio ad urging others to buy Bitcoin, and a series of investing seminars at a local hotel. “If you don’t take a risk, you can’t get anything,” he says. “And if it’s going to be the future of currency, then you better start now.”

Related story: Bitcoin blooming in Nigeria
Posted by Naijafeed at 1/22/2018