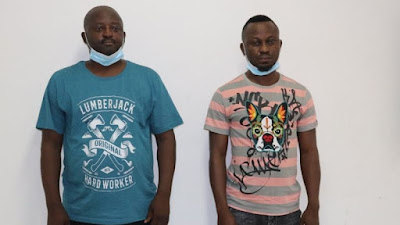 Nigerian police say they cloned the website of a Dutch company to obtain an order from the German state of North Rhine-Westphalia.

When the PPE didn't show up, a state government representative visited the company's offices in the Netherlands.

The company then informed him that they had never done business with him.

The representative notified the Dutch police and investigations led to Nigeria where the two suspects were arrested in the commercial capital, Lagos. They are due to appear in court soon.

The suspects, Babatunde Adesanya and Akinpelu Hassan Abass, were members of a "sophisticated transnational criminal network", Nigerian police said in a statement.

The pair allegedly cloned the corporate website of ILBN Holdings BV in order to carry out the scam on Freiherr Fredrick Von Hahn, who represented North Rhine-Westphalia. The PPE was needed for the battle against coronavirus.

Two more arrests have also been made in the Netherlands.

According to Nigerian police, Mr Von Hahn was "disturbed" when the PPE did not arrive, only to find out that "the company never did business with him and that the transaction was a scam".