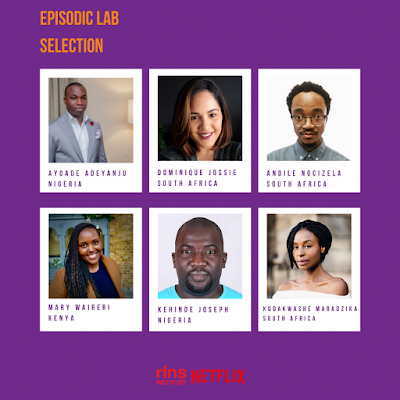 Three Nigerians have been selected among the twelve (12) African candidates chosen to participate in the 3-month Netflix Episodic Lab (EPL) and Development Executive Traineeship (DET) launched by the Realness Institute.

2 Nigerians were selected to participate in the Episodic Lab where they will develop their story concepts alongside expert story consultants and creative producers. They are Ayoade Adeyanju with Agent 419 and Kehinde Joseph with Osupa.

Netflix’s Episodic Lab and Development Executive Traineeship are part of efforts by the global streaming giant and the Realness Institute to produce more original local content from creative writers in Africa.

For the DET, Ololade Okedare is the only Nigerian selected to participate in the program where they will accompany the incubation of the six potential Netflix African Original Series.

The Episodic Lab will take place remotely till 5 September 2021, where selected participants will receive about $2,000 monthly stipend so that they can focus entirely on their development. At the end of the lab, each writer will have an opportunity to pitch their incubated concept to Netflix to have their series further developed for production.

Kehinde Joseph has worked for 9 years as a radio presenter on Eko FM in Lagos. He’s the sole Nollywood screenwriter with 3 movies that’s grossed over 100 million at the box office.