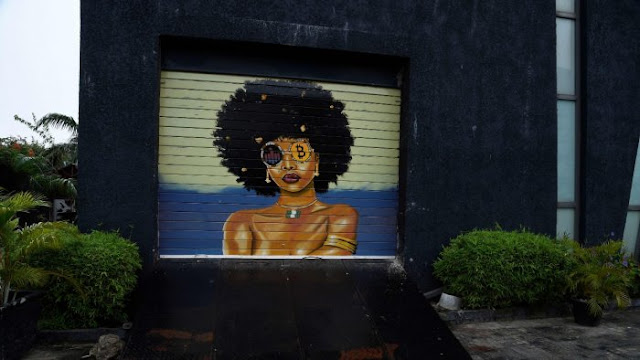 At only 29, Nigerian pop-artist Osinachi has sold paintings on Microsoft Word for several thousand euros, or the equivalent amount in ether, a cryptocurrency often used to buy digital art.

One of his works, Becoming Sochukwuma, shows a black dancer wrapped in a tutu made of African fabric, dreadlocks tied in a bun, swirling on a computer screen.

But what makes the painting truly unique is its endorsement with an NFT (Non-Fungible Token) -- a set of data stored in a blockchain that is used as a certificate of ownership.

The digital painting was sold in April for $80,000 worth of virtual money on the crypto-art market, a growing business in Africa's most populous country.

Worldwide, NFTs, which serve as a unique identifier, have reassured collectors when buying online art and propelled digital artists to stardom. Between January and May, NFTs generated around $2.5 billion worth of transactions according to the website NonFungible.com sparking the interest of global auction houses Christie's and Sotheby's.

Osinachi's pieces have done very well on this emerging market and in just a few months the young man has become the most famous African crypto-artist.

He was already using Microsoft Word to paint when he was at university but "gallerists didn't care about digital art" until recently, he told AFP.

It was in 2017 that he discovered he could sell his artwork directly to buyers using a blockchain - where a record of NFT ownership can be stored.

In the past six months, as crypto-currencies and NFTs have boomed, digital art like Osinachi's has thrived.

"Now, galleries are after him," said Oyindamola Fakeye, creative director at the Center for Contemporary Art in the country's cultural capital Lagos.

"He has a very positive influence on other African digital artists."

Blockchain, cryptocurrency, NFTs, are terms that are no longer foreign to Osinachi, who spends a lot of time in person and online explaining what they are to other artists.

Many creative minds and entrepreneurs in Nigeria are inspired by his success.

Nigeria has about "a hundred" digital artists, Okeowo says, and "most have been inspired by Osinachi".

With its large, youthful, creative and connected population, the West African nation has "the potential to lead" when it comes to NFTs, Osinachi believes.

"We have plenty of talents here. The creative energy in Lagos alone is baffling among young people."

Nigerians are also fond of cryptocurrencies, contributing to the success of NFTs.

In times of economic crisis, with a devalued naira, a growing number in the country are chosing to invest in digital currency.

Last year, more than $400 million were exchanged in cryptos, making Nigeria the third-largest user of digital money worldwide, behind the US and Russia, according to Statista, a German company specialising in market and consumer data.

Entrepeneur Uyi Omokaro was an early believer in the potential of NFT in Nigeria.

This month, he launched Wearmasters, a platform to sell Africa-made NFT art, where he hopes to bring on some of Nigeria's most talented emerging artists like 23-year-old painter Daniel Pengrapher

"Our ambition is to give them international visibility through NFT."

For now, NFT collectors are few in the country. One of them is Michael Ugwu, director of a digital studio in Lagos.

He started investing in cryptocurrencies in 2017, after several devaluations of the naira, before discovering his real passion: the crypto-art market.

"The traditional art space can be a little bit snobbish," said Ugwu. On the crypto-art market, he says he "found a community, so welcoming, so interactive".

He owns about "a hundred" NFTs he says proudly, but he also considers them investments.

Ugwu has used NFTs as insurance to obtain loans on the crypto-finance market, a process that would take months in the traditional banking system.

Germany has agreed to return Nigeria’s looted treasure. Will other countries follow?