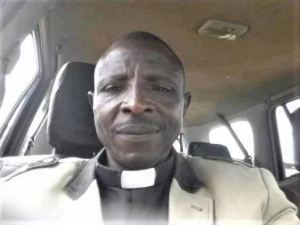 Suspected Fulani herdsmen on Sunday killed a Christian security guard as they abducted a pastor in central Nigeria and wounded the church leader’s wife, sources said.

James Ngyang, a member of the church led by Pastor Bung Fon Dong of the Church of Christ in Nations (COCIN), was killed in the attack at the residence of Pastor Dong on church premises in Ganawuri, Riyom County, Plateau state, said area resident Danjen Bagu Gang.

“Armed gunmen we believe are Fulani terrorists attacked Ganawuri and abducted the Rev. Bung Fon Dong alongside James Mann, who later escaped from the hands of the kidnappers,” Gang told Morning Star News in a text message.

“The gunmen stormed the RCC [Regional Church Council] chairman’s residence, at about 10 p.m., shot and wounded the pastor’s wife, and killed one James Ngyang, a member of the church and security church worker, before they forcefully took away the pastor at gunpoint.”

On Monday, the gunmen contacted the pastor’s family and demanded 20 million naira ($46,650) for his release, Gang said, adding that Ngyang’s body was buried on that day.

Police confirmed the kidnapping of Pastor Dong. Alfred Alabo, deputy superintendent of police of the Plateau State Police Command, said in a press statement that the attack happened Sunday night, and that Mann is the principal of the Government Secondary School in Ganawuri.

“We have deployed operatives to track down the criminals and rescue the hostage,” Alabo said.

Saying the three women were receiving treatment at Barkin Ladi General Hospital after being shot at about 10:45 p.m. by “armed men suspected to be Fulani militias,” Mwantiri identified the victims as Rose Bitrus, 41; Polina Mathew, 43; and Grace Pam, 42.

In the Abaji area of Nigeria’s Federal Capital Territory, gunmen on Sept. 4 kidnapped dozens of people, including the son of Evangelical Church Winning All Pastor Bala Akpeni, in an attack on predominantly Christian Kutaru village, according to the ECWA’s Evangelical Missionary Society (EMS).

“On the night of Sunday, Sept. 4, many Christians were kidnapped from one of our mission fields,” EMS Coordinator James Saleh said in a request for prayer. “Among those kidnapped is Steven Bala, the son of Pastor Bala Akpeni, the missionary taking care of the prayer house there. Please pray for God’s intervention.”

An ECWA pastor and two members of his church taken into captivity by terrorists for two months have been released and are now recovering from the trauma, Saleh said.

“Praise God for the release of our missionary, the Rev. Ahmadu Maikudi, and two members of his prayer house after over two months of captivity in the den of terrorists and a lengthy negotiation process for their release,” Saleh said. “We appreciate all those who contributed in one way or the other to facilitate their release. We pray that God will heal them from the trauma of that harrowing experience and give them peace in their hearts.”

Area community leader Alhassan Isah said in a Sept. 5 statement that incessant invasions of the area by terrorists and bandits have come at alarming rates and called on security authorities to act.

“It’s no longer rumors but a fact that there is a serious state of insecurity in many parts and village areas of the nation’s capital (Federal Capital Territory-Abuja), with Abaji Area Council not being an exception,” Isah said. “Leaders of these communities have reported on the siege and rampaging killings and abductions of residents on daily basis by terrorists, kidnappers and bandits, thereby displacing thousands among the people and forcing them to flee out of their communities.”

“As matter of urgency and importance, there’s the need for security agencies to take more proactive measures before the acts of terrorism, kidnapping and banditry completely take over Abaji Area Council,” Isah said.

Nigeria trailed only China in the number of churches attacked, with 470 cases, according to the report.

In the 2022 World Watch List of the countries where it is most difficult to be a Christian, Nigeria jumped to seventh place, its highest ranking ever, from No. 9 the previous year.

Related stories: Video - Is Nigeria's security crisis out of control?