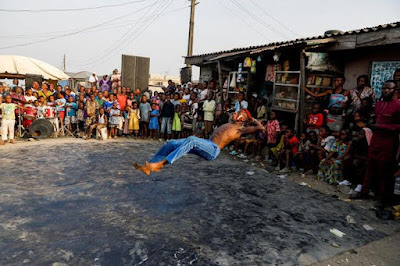 In a street in a poor neighbourhood of Lagos, a bare-chested young man, Gift Eze, holds his screaming partner, helping calm the rage within and stop him fighting.

Residents of Oworonshoki have seen their share of violence, with robberies and tit-for-tat gang murders once commonplace in this part of Nigeria's vast, boisterous commercial capital.

But the scene on Christmas Eve, a dance routine between two men caked in chalk, showed how far the community has come since the annual Slum Party, an art event using dance to tell stories of the local community, was established four years ago.

Days of dance workshops culminated with an all-day carnival aiming to reclaim the streets and reduce tensions between rival gangs. Before long, onlookers were dancing along with the drums, blurring the lines between performers and their audience.

"We are using dance as a focal point ... to come to the community and just talk about the various socio-political issues that needed to be addressed, using a party as the template," said Sunday Ozegbe-Obiajulu, who founded the event.

Eze, one of the Slum Party's participants, said the event has been transformational.

"I've been able to achieve a big goal in my life, and Slum Party has really changed a whole lot for me," he said.

Community leader Oriyomi Akeem said Slum Party has helped bring peace to a neighbourhood once known as a no-go area overrun by gangs. "Now everything is calm and good," Akeem said.

Ozegbe-Obiajulu hopes the carnival's success could be replicated by people in other troubled areas of Nigeria and beyond.

"With their dance, their poetry, their music, they can definitely use it to bring some sort of attention to their community, they can also use it to inspire the young ones."