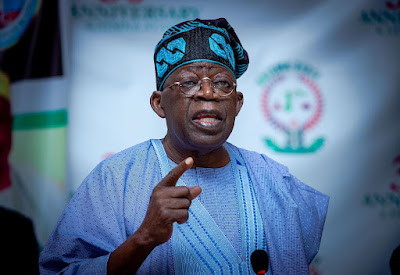 Ruling party presidential candidate Bola Tinubu said on Monday Nigeria's February election would be a significant step in consolidating democratic gains at a time when some other governments in the region have been ousted by military coups.

In a country with a long history of electoral fraud and a built-in advantage for the ruling party, Tinubu is the frontrunner for the All Progressives Congress party to succeed President Muhammadu Buhari, who is stepping down.

In an address at the Chatham House think-tank in London, Tinubu cited a worrying trend of attacks on personnel and infrastructure of Nigeria's Independent National Electoral Commission (INEC) in some parts of the country.

"The next election, which will take place in the first quarter of 2023, can be considered as especially significant in Nigeria's quest for democratic consolidation," said Tinubu.

He indicated that Nigerians in the diaspora abroad would not be able to vote, saying Africa's most populous nation was still building confidence in its voting system, 23 years after the end of military rule.

"INEC is still yet to assure us, during this election, that electronic transmission (of results), the technology being used for accreditation and total vote count, is reliable, dependable and assuring in our democratic process before we introduce complicated elements of mail-in ballots and so forth."

Nigerian democracy has also been marred by widespread corruption and an Islamist insurgency in the north.

Tinubu, 70, has been criticised at home for refusing to take part in television debates and not granting media interviews. On Monday, he referred most questions to his campaign team.

He promised to grow the economy by more than 7% annually, double the country's GDP in the next decade, expand agricultural output and continue with some of Buhari's policies.

Back in Tinubu's home state of Lagos, his main rival, People's Democratic Change candidate Atiku Abubakar, told a rally that his government would set aside $10 billion to help small businesses run by women and youth.