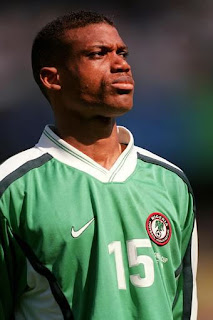 The 40-year-old former midfielder, who captained Nigeria and won 63 caps, is set to be appointed in the coming days.

The NFF have acted quickly to fill the vacancy following the sacking of Stephen Keshi on Saturday.

Oliseh was part of the Nigeria squad that won the Africa Cup of Nations in 1994 and Olympic gold two years later.

He also played at the World Cup in 1994 and 1998, helping the Super Eagles to the last-16 at both tournaments and in the latter he scored a memorable winner as Nigeria shocked Spain 3-2 in a group match.

A member of the "golden generation" of Nigerian football stars, alongside Jay-Jay Okocha, Nwankwo Kanu and Finidi George, Oliseh has been working as a pundit, sport consultant and Fifa Technical committee member.

Oliseh has little management experience, having coached only Belgian lower league side Vervietois between 2008 and 2009, but he does hold the Uefa Pro Licence.

He would take over from NFF technical director Shaibu Amodu and assistant coach Salisu Yusuf, who are are currently in charge on an interim basis.