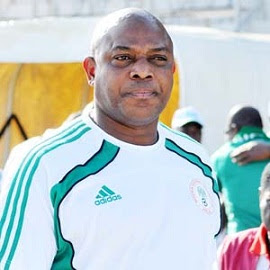 The former Nigeria international, who coached his country to victory in the African Cup of Nations in 2013 and into the last 16 of the World Cup in Brazil last year before losing to France, has been replaced by Shuaibu Amodu, who was appointed Nigeria's technical director last week.

The statement issued by the NFF said it had reviewed Keshi's "actions and inactions" and found he lacked "the required commitment to achieve the federation's objectives as set out in the coach's employment contract."

It added it had "decided to exercise its option to summarily terminate the employment contract of Mr. Stephen Keshi with the federation with immediate effect".

An NFF disciplinary committee headed by Chris Green has been investigating allegations that Keshi applied to coach Ivory Coast while under contract with Nigeria.

Keshi, 53, took over the national side in 2011 and led them to a long-awaited third African title two years later.

The charismatic coach then quit the day after their 1-0 victory over Burkina Faso in the final, only to change his mind a day later.

The same thing happened after the World Cup last year when he quit and was then reinstated before threatening to leave again last October after a poor run of results as they failed to qualify for this year's African Cup of Nations.

Keshi is the only African coach to qualify two African teams for the World Cup finals -- Togo in 2006, as well as Nigeria. He played 64 times for his country and spent the peak years of his playing career in Belgium in the 1980s and 1990s.