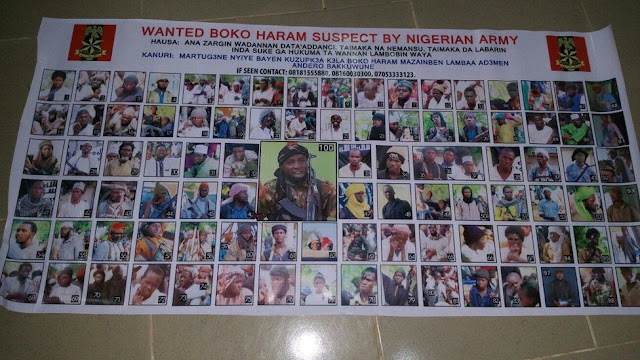 Nigeria's army has published photos of nearly 100 people whom it says are its most-wanted Boko Haram suspects.

The army urged the public to phone special hotlines if any of the suspects were spotted, as it steps up efforts to hunt down the Islamist militants.

President Muhammadu Buhari, who took office in May, has given the military a mid-November deadline to defeat them.

Boko Haram has lost most of its territory this year but increased suicide attacks and bombings since May.

It began its insurgency in 2009 in north-eastern Nigeria, but has since spread its activities to neighbouring Chad, Cameroon and Niger.

Boko Haram is allied with the Islamic State (IS) group which is fighting for a global caliphate - a state governed in accordance with Islamic law.

The photos on the list appear to have been sourced from Boko Haram propaganda material, including videos, reports the BBC's Bashir Sa'ad Abdullahi from the capital, Abuja.

Its leader Abubakar Shekau appears twice on the list, despite previous claims by the army that he had been killed and claims by Chad's President Idriss Deby in August that the group had a new leader who was open to dialogue.

The army say it will circulate the banner across the country to help it track down the insurgent leaders.

Appeals for public co-operation are written in English as well as Hausa and Kanuri, the two main languages in Nigeria's north-eastern areas where Boko Haram is most active.