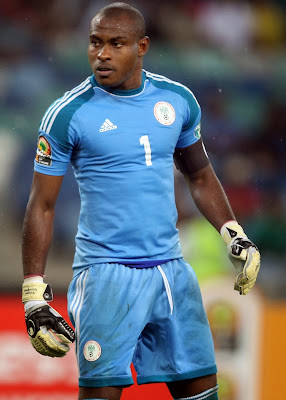 Nigeria goalkeeper Vincent Enyeama has walked out of the squad to face DR Congo in a friendly on Thursday and retired from international duty.

The 33-year-old's decision came after coach Sunday Oliseh replaced him as captain with Ahmed Musa - only hours before the match in Verviers, Belgium.

"I am no longer Nigeria captain or goalkeeper nor available for Nigeria duty," he said on Instagram.

"I fought a good fight for 13 years, but now I have finished my course".

Enyeama is the Super Eagles most capped player with 101 appearances and became the captain following the retirement of Joseph Yobo after the 2014 World Cup.

The Lille stopper refused to confirm that the decision to strip him of the skipper's armband hastened his retirement but he admitted it was a difficult time to leave.

"It's been the most difficult period of my life, losing my mother and the emotion," he told BBC Sport.

"After playing for the Super Eagles for 13 years, you never think that it would end like this but the time [to retire from international football] has come.

"There is never a good time to leave but I will always be a fan of the Super Eagles and Nigerian football."

Enyeama made his debut against Kenya in May 2002 in Lagos and during his international career he helped Nigeria win the 2013 Africa Cup of Nations in South Africa, where he emerged as the tournament's best goalkeeper.

"I just want to say thanks to my family and friends and all the fans who have supported me all these years," he added to BBC Sport.

"I played at three World Cups, won the Africa Cup of Nations and fought alongside brave compatriots so I am leaving on a high."