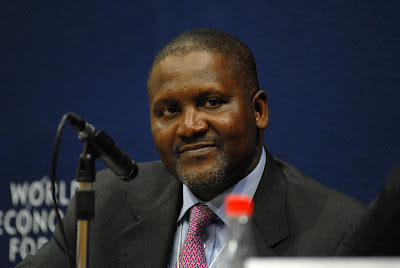 Africa's richest man, Aliko Dangote, is of the view that Nigeria's economic crisis is exaggerated. He said that many businesses continue to thrive, despite the foreign exchange crisis.

The business mogul argued that the current situation cannot be described as a crisis because while some businesses faced serious challenges, others did not. "It all depends on the business," he said.

Dangote stated his view at the The Economist Forum in Lagos, yesterday, while answering questions on the potentials of the Nigeria economy in the face of the current economic challenge.

He said: "I think people are underrating the economy of Nigeria. They just go and look at foreign exchange because oil has gone down and believe that everything has gone out of the window. That is not correct."

He said that the Dangote Cement, as at January and February, recorded 47 per cent growth. The company, he said, estimated that in the next three months, it will witness 60 per cent growth. "We have seen growth in our sugar business of about 20 per cent" he said.

"If your business model is to import 100 per cent of your component and just be an assembly plant, then definitely you will face challenges because the influx of foreign exchange is not like what it used to be a year and half ago when we used to receive about 3.2 billion dollars on monthly basis and our outflow was around two billion dollars. Today, we are receiving just about a billion dollars.

"In our cement sector, we had that vision and we said let us properly industrialise. By this, we mean that our raw materials are almost 90 percent locally sourced. So we only need foreign exchange to buy spare parts, pay some of our expatriate staff salaries in dollars and a get a little bit of gipson which is not readily available here."

He said that the only option left for businesses in Nigeria was to export. "We now have capacity to export cement worth about 500 million dollars on an annual basis. With that, it means that we are self-sufficient.

"If you look at most of our projects, they are all very transformational projects because we saw this coming. In the last ten years, we said we want to do things in a manner that by 2018, we don't have to go to the Central Bank of Nigeria to ask for foreign exchange. We want to be people who will sale forex to the market."