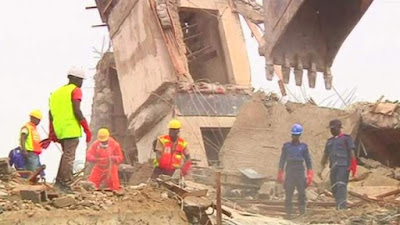 The number of people killed when a five-storey building under construction in Nigeria's main city, Lagos, collapsed yesterday has risen to 30, emergency officials say.

The building, located in the wealthy Lekki district, crumbled during heavy rainfall.

Thirteen people have so far been rescued but it's thought others may still be trapped in the rubble.

In a statement, the Lagos State government said work on the building had continued without a permit from the authorities, who had sealed off the site.

They have ordered the managers of the project to report to police or face arrest.

The building had been inhabited by construction workers and their families.