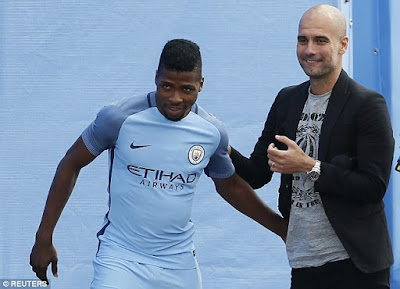 Manchester City are set to prevent Nigerian striker Kelechi Iheanacho from playing for his country at this summer's Olympics in Rio, Brazil.

New City boss Pep Guardiola wants the 19-year-old to stay with the English Premier League side for pre-season.

Nigeria included Iheanacho in their provisional squad, despite having received a letter from City to say the player would not be available.

"I don't know if my team and my country have decided," Iheanacho said.

"If your country wants you to play for them you surely have to do so, but it's not up for me to decide. I don't know if it has been concluded or not."

Iheanacho, who joined City from the Taye Academy in his native Nigeria in January 2014, broke into the club's senior side last season and scored 14 goals in 35 appearances in all competitions.

His displays have seen him move above Wilfried Bony, the experienced Ivory Coast international, in the pecking order.

If he went to Brazil for the Olympics for the football tournament, which takes place between 3-20 August, he would missing the opening weeks of the Premier League season.

City believe that the Iheanacho would benefit more from spending a full pre-season working with Guardiola as the player seeks to establish himself as a first-team regular.

Versatile
Speaking at a fan event at City's Academy Stadium, Iheanacho said: "Everyone knows Pep and what he can do. I think he is a great manager and I think he will bring many things to this team.

"I am happy with what I did last season and now I have to work really hard this season to get something for the team and work for the team as well."

Iheanacho faces fierce competition to win a regular place in City's line-up, with new signing Nolito able to play in attack, as well as Bony and first-choice forward Sergio Aguero.

But the teenager believes that he can persuade Guardiola to give him a chance as City seek to improve on last season's fourth-place finish.

He said: "Everyone wants to start games and work hard. I need to work extra hard and I will get a chance," he added.

"It will be a big season for me, and for every player."