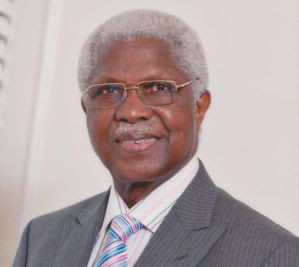 According to the SUN newspaper, a statement from his family said he died at a London clinic on Sunday.

The statement, signed by his brother and the traditional ruler of Oko in Anambra State, Igwe Laz Ekwueme, said Mr. Ekwueme died at 10:00 pm.

The statement reads in part: “Ekwueme family regrets to announce the peaceful passing away of their patriarch, the former Vice-President of the Federal Republic of Nigeria Dr. Alex Ifeanyichukwu Ekwueme GCON.

The former vice president, who turned 85 in October, reportedly collapsed in his Enugu residence few weeks ago.

He was immediately taken to the Memfys Neurosurgery Hospital, Enugu, where he relapsed and went into a coma.

Mr. Buhari authorised the trip after being briefed on Mr. Ekwueme’s condition.

He served as deputy to former President Sheu Shagari between 1979 and 1983.

The late Second Republic politician was one of the most educated Nigerian political leaders.

He was educated at the King’s College, Lagos and earned a degree in Architecture and City Planning from the University of Washington, as a Fulbright scholarship recipient.

Mr. Ekwueme also took a masters degree in Urban Planning and later obtained a PhD in Architecture from the University of Strathclyde.

Aside his degrees in Architecture, Mr. Ekwueme also obtained degrees in Sociology, History, Philosphy and Law from the University of London. He was also called to the Nigerian Bar.

He was president of the Nigerian Institute of Architects.

Following the coup that ousted the Second Republic administration of Shehu Shagari in December 1983, Mr. Ekwueme was among politicians arrested by the incoming military government of Muhammadu Buhari.

Mr. Ekwueme and other politicians accused of various infringements and corruption were detained at the Kiri-kiri Prison in Lagos.

The family has not announced burial arrangement yet.