Pastor in Nigeria Biodun Fatoyinbo steps down after rape allegations 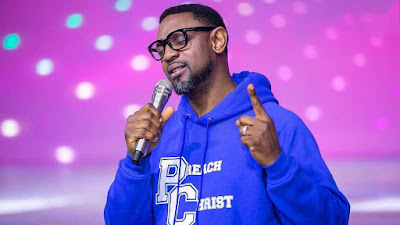 A flamboyant pastor in Nigeria has stepped aside from his church after a celebrity photographer accused him of raping her twice before she turned 18.

Biodun Fatoyinbo denied the allegation by Busola Dakolo, who is married to popular musician Timi Dakolo.

He said he was taking "leave of absence from the pulpit" because it was the "right thing to do".

The social media campaign has led to thousands of people sharing their stories of sexual abuse and harassment since 2017.

But women in socially conservative Nigeria have so far avoided speaking out, fearing a backlash or stigmatisation.

Nigeria has a huge Pentecostal Christian population and Pastor Fatoyinbo is the head pastor of the popular Commonwealth of Zion Assembly church in the capital, Abuja.

His church is one of the biggest and fastest growing in the country, especially among young people, says the BBC's Joshua Ajayi in Lagos.

In a video circulating on social media since last week, Ms Dakolo said she was raped by the pastor at her father's house early one morning, and the second time on a secluded road.

Her allegation led to protests on Sunday at different branches of Pastor Fatoyinbo's church. Protesters held placards saying: "Thou shall not rape."

The pastor said he was "absolutely innocent", but had decided to step down from the church after seeking "spiritual counsel" from Christian leaders around the world.

"This step enables me to submit to the concerns of my spiritual mentors as they consider all the issues that have been raised against me," he added in an Instagram post.

The development has caused shock and anger amongst followers of the pastor and supporters of Mrs Dakolo, our reporter says.