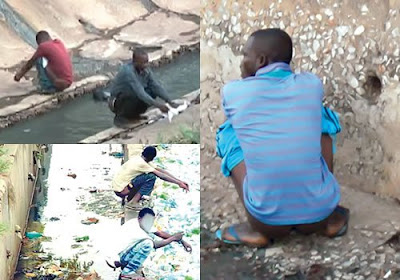 Attention to the issue of open defecation has often focused on India, which is home to by far the largest population of people who practice it. In October 2014, the country embarked on an ambitious five-year mission to eliminate open defecation nationwide, building millions of toilets and aiming to change the habits of hundreds of millions of its citizens.

But as India approaches its target deadline for eliminating the practice, attention is turning to the country next in line — Nigeria.

One in four Nigerians — about 47 million people — practice open defecation, according to the World Health Organization and UNICEF’s joint monitoring report, particularly in the north of the country where there is less access to good toilets. Fewer than half of households in Nigeria have their own toilet.

The practice brings with it significant health risks, linked to deaths from diarrhoea, cholera, and typhoid. It is also a risk factor for violence against women and girls who, for example, may need to leave home in the dark to find somewhere to defecate.

In 2016, Nigeria launched an action plan of its own, aiming to end open defecation by 2025. The plan involves providing equitable access to water, sanitation, and hygiene services and strengthening tailored community approaches to total sanitation.

But with the government yet to release funding for the initiative, advocates say progress is happening at a snail’s pace. In November 2018, as parts of the country struggled with high levels of water-borne diseases, Nigerian President Muhammadu Buhari declared a state of emergency in the water, sanitation, and hygiene sector.

In the meantime, NGOs are working where they can to get the ball rolling on ending open defecation in Nigeria.

Nigeria needs an estimated 959 billion Nigerian naira ($2.7 billion) to end open defecation by 2025. Of that, the government is expected to provide around 25%, or NGN234 billion — justified on the grounds that the country loses NGN455 billion annually to poor sanitation.

The other 75% of the cost will be incurred by households. “The majority of the costs to households will be spent on constructing toilets for those that don’t have [them], while funds from the government will be spent on public projects including ensuring access to toilet facilities at public places,” explained Zaid Jurji, head of WASH at UNICEF Nigeria.

With so much money expected to be pumped into the challenge, the government is encouraging the emergence of a toilet business ecosystem, which includes innovative toilet designers, financiers to provide loans and other financial tools to households, community organizations, and more.

But advocates say a wide gap exists between ambition and action. To meet the 2025 target, Nigeria needs to build 2 million toilets every year from 2019 to 2025. Bioye Ogunjobi, a WASH specialist for UNICEF, said the country is currently delivering about 100,000 toilets annually.

“The current effort is like a drop in the ocean,” Ogunjobi said.

Just like India’s Prime Minister Narendra Modi, Buhari has directed government at all levels to redouble its efforts.

In a speech at the time of the emergency declaration in November, he said the 2030 global goals on WASH “cannot be achieved if we continue with ‘a business as usual’ approach. Henceforth, federal government support to state governments will be based on their commitment to implement the National WASH Action Plan in their respective states and to end open defecation by 2025.”[a]

But nine months later, advocates say little has changed — not least because the federal government is yet to release its share of funding for the initiative. Some state governments have also not yet provided funding, which officials attributed to the country’s recent elections, meaning new budgets will not be passed until next year.

Nonetheless, Chizoma Opara, acting coordinator of “Clean Nigeria” — the government’s behavior change campaign on ending open defecation, which is supported by UNICEF, the World Bank, and the African Development Bank, among others — told Devex the government is fully committed to the project.

She said she and other stakeholders had visited India to study their strategies and were aiming to localize and replicate them in Nigeria, describing the campaign as having the potential to be a “transformational” social movement.

As they wait for the full roll-out of the initiative, UNICEF and its partners are already working with some states, local governments, and interest groups to make what progress they can.

So far, 11 of Nigeria’s 774 local government areas have been certified as free from open defecation — a process that involves the establishment of a local committee and random checks by government officials.

But both WASH advocates and government officials acknowledged that more needs to be happening if the country is to have a chance of meeting its 2025 target.

Development commentator Kevwe Oghide said she would like to see laws prohibiting open defecation — which has already happened in some states — and urged companies to take on sanitation in their corporate social responsibility work.

“[We need] mobile toilets, [to] repair broken facilities, [better] water supply,” she said. But she added: “It is not enough to provide clean and safe toilets … There is also a need to change behaviors as a means to bridge the gap between building latrines and their proper use.”

Jurji told Devex that successful efforts are happening in some areas — from legislation to toilet construction to the participation of state authorities. “Everyone is working, but this needs to be happening across the country to achieve desired results,” he said.

Related stories: Nigeria second in the world in open defecation