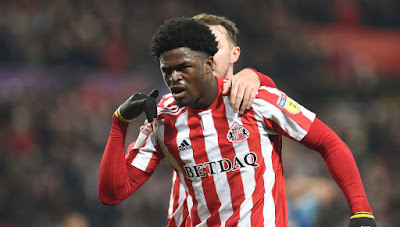 Nigeria coach Gernot Rohr says he is keen on having England-born striker Josh Maja play for the Super Eagles next month.

Maja, born in London to Nigerian parents, scored 16 goals in 30 appearances for Sunderland last season before switching to French club Bordeaux in January.

Uncapped by England at any level, Maja has scored twice in 10 appearances in Ligue 1 for Bordeaux.

"I ate with Samuel Kalu and Josh Maja, who is a second Nigerian in Bordeaux and is eligible for Nigeria. I already started talking with him about the national team," Rohr told Le Point G in France.

"He can easily play in the friendly matches (for Nigeria), but he can only do it because he has not played for the under-20's."

Rohr was referring to the fact that Nigeria will not have to apply to Fifa for a change of allegiance for Maja, as the youngster has not played for another nation at youth level.

The 20-year-old's performances in France have caught the eye of Rohr, who played played at Bordeaux then coached them when they lost to Bayern Munich in the 1996 Uefa Cup final.

Rohr has already named a 23-man squad for the friendly against Ukraine next month, but the German is hoping to persuade Maja to play in the game which serves as a build-up to the 2021 Africa Cup of Nations qualifying which starts in November.

"We have a game in Ukraine, and I've been informed that it might be too late to get visas for players who do not have a European passport," said Rohr.

"But he [Maja] does not have this issue because he is English, so he could eventually join us. It is very possible that I pick him to go to Ukraine.

"For Maja, it would be easier to have him. I have a lot of attackers, but it's not impossible that I select him."

They have also snapped up London-born Joe Aribo, who plays for Scottish giants Rangers, with the midfielder set to make his debut against Ukraine in Dnipro.

His teammate and Liverpool's loanee Sheyi Ojo also told the BBC that he would love to represent Nigeria if they approach him.