Nigerian star Tekno has been questioned by police after travelling through Lagos in a van with semi-naked women.

A video, which appears to be filmed from another car in a traffic jam, shows a man sitting in a glass-sided lorry throwing money at women dancing around a pole in their underwear.

The singer has denied accusations that it was an advert for a strip club.

Instead he insists that he was in the glass box on a truck travelling between locations while shooting a music video.

The police started an investigation after there was "outcry on social media" about the video, police spokesman Bala Elkana told the BBC.

It was originally reported that the singer was arrested, but Mr Elkana says he was invited for questioning and voluntarily visited the police station in Lagos on Tuesday to make a statement.

Tekno features in Beyonce's Lion King album and his songs include the hit Pana which has had over 100 million views on YouTube.

The video, whose origin is unclear, shows the women dancing while the vehicle stopped in a traffic jam: 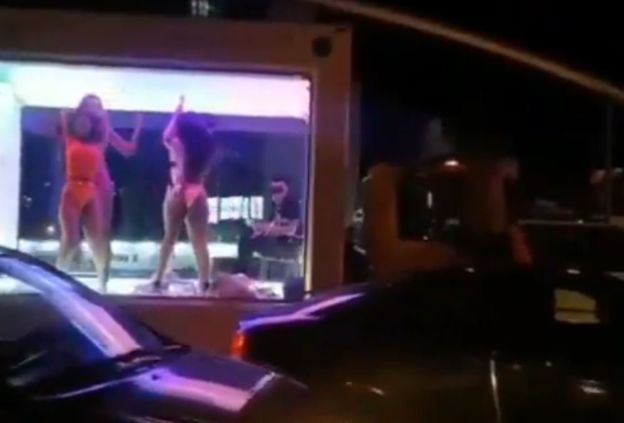 The star, whose real name is Augustine Kelechi, apologised on Instagram for any offence he had caused.

He said they had been "having fun" shooting a music video and then, at midnight, had to travel between locations:

"We were shooting a music video and we had a shortage of vehicles to convey people to the next location, because some of the cars broke down in between the shoot," he said on Instagram.

He didn't explain why, on the journey, he was throwing money at the women.