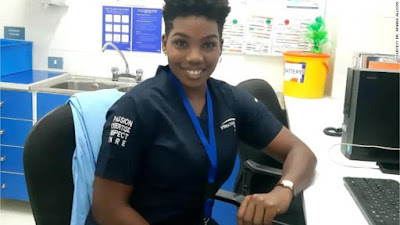 As Dr. Amarachukwu Allison examined the Italian patient who walked into her consulting room in Ogun state, southwest Nigeria, complaining of fever, headache and fatigue, she suspected instantly what his ailment was.

It was February and the world was just waking up to the realities of Covid-19 as the highly contagious disease ravaged nations and locked down economies.

"I had been following the news trends at the time so when he walked into my consulting room with his complaints, he had a fever, it was high grade, headache, muscle pain and fatigue. I took his medical history and he said he had just come from Italy ... so I knew it was likely Covid-19," she told CNN in an Instagram live interview.

The unnamed Italian man had arrived in the country from Milan just 48 hours before he visited the private medical center where Allison worked.

Trying not to panic about the risk of contracting the disease herself, Allison said she counseled the man and gave him a face mask.
"I told him I would need to isolate him and he was very cooperative," she said.

She didn't know it at the time but Allison, 32, had just detected Nigeria's first confirmed case of coronavirus and her quick thinking has attracted praise from many Nigerians who hailed her a hero for helping to contain the spread of the virus in Africa's most populous nation.

The Ogun state government recently celebrated Allison and hailed her "singular brilliance."
"The Ogun State Government appreciates the young female doctor who suspected the index case in Nigeria in our State, Dr. Amarachukwu Karen Allison of Lafarge Nigeria. Her singular brilliance led to the early diagnosis and rapid containment of the first Covid-19 infection," the statement read.

The man was later transferred to an isolation center in the neighboring city of Lagos and Allison was promptly placed in quarantine.

"It was a really scary experience and I am so thankful that I tested negative," recalled Allison, who said it was her third experience of being quarantined.

"Strangely it was my third time going into quarantine because during the Ebola period, I had secondary contact and was quarantined and then I was exposed to viral hemorrhagic fever in November and was also quarantined.

"When I had to go at this time, I thought to myself, 'What is happening?' and I had to call my parents. My organization brought a psychologist to call in every day to support us and I cried a lot," she told CNN.

A sharp rise in cases

Despite her best efforts, Nigeria's cases have risen sharply from one case in February to 3526 confirmed cases as of May 8, with 601 recovered cases and 107 deaths, according to data from the Nigeria Centre for Disease Control (NCDC).

Many fear the official numbers don't present the true picture of cases in the country as the NCDC says that just over 22,000 samples have been tested, which is less than 1% of the estimated 200 million population.

"The pandemic is a really difficult time for any government and anybody anywhere," Allison said.
"Everybody is trying to do the best that they can and as much as they can to handle things. ... We are not only dealing with the pandemic but also the poverty crisis, and getting information across to people is somewhat of a problem," she said, highlighting the challenges the country faces in the pandemic.

Nigerian President Muhammadu Buhari ordered a lockdown in key states in March, including Ogun state where she works, but five weeks later, that lockdown has now been eased to get Nigeria's economy going again.

"I think that as the lockdown is being eased, we the people need to play a role in stopping the spread by wearing our face masks, washing our hands with the right technique under running water with soap, respiratory etiquette covering your cough, sneezing and social distancing," she said.

Allison has drawn comparisons to another Nigerian female doctor, Stella Adadevoh, who detected Nigeria's first case of Ebola in July 2014 and consequently saved Africa's most populous nation from a mass outbreak of Ebola.

Adadevoh suspected Liberian national Patrick Sawyer had Ebola when he arrived at her hospital in Lagos, and successfully kept him there despite resistance from him and pressure from government officials to release him from the hospital.

Adadevoh succumbed to the Ebola virus while in quarantine and died August 19, 2014.
"It makes me feel humbled and honored. I am thankful to her for what she did," said Allison when asked about the comparisons to Adadevoh.

"It's been overwhelming and it makes me happy when my fellow human beings appreciate me. I feel loved," she said.