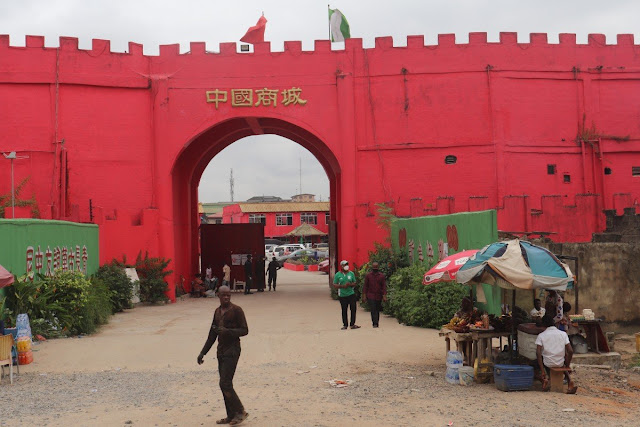 Nigerian and Chinese flags flutter in the morning breeze atop of the rampart of Chinatown in the city of Lagos. It’s a tall wall, modelled after the medieval Great Wall of China, painted red and fortified by bricks.

Its gate is half open, with three security officers with handheld thermometers checking temperatures of traders and customers coming in. Beside the gate, a water bucket, a bottle of hand sanitiser and liquid soap serve for routine handwashing while a few Chinese mingle in a terrace near the car park.

Inside the courtyard, only a few of the more than 200 shops selling trousers, shirts, perfume, laptops, ceramic coffee cups, shoes and travel bags are open. A handful of traders bargain with customers while others sleep or watch movies on their mobile phones. A few months ago, the scene would have been different: lively, noisy and crowded, traders say.

But things began to take a new shape when local authorities in Nigeria rolled out measures to curtail the spread of coronavirus, including restricting entry into the country for travellers from China and other nations around March. Traders say the restrictions, as well as a curfew and bans on interstate travel, nearly brought commercial activities to a halt in Chinatown.

The number of confirmed new coronavirus cases in Africa has topped the 1 million mark, with the death tally at more than 22,000, according to the World Health Organisation. Around 46,140 cases have been recorded in Nigeria, Africa’s most populous nation, as well as more than 940 deaths.

Lagos, the largest city in Africa with over 20 million people, is the epicentre of the outbreak in Nigeria with early 20 per cent of the country’s Covid-19 cases.

For more than 15 years, Chinatown has become a hub for thousands of Chinese visiting the country. Its warehouses, restaurants and shops serve local traders as well, including Mike Echelom, who has been trading there for more than a decade.

Echelom, who sells clothes, says business has been a struggle for most. “The total lockdown was worse but partial easing of the lockdown has seen slow recovery. Customers are bargaining for less than cost price,” he said. “And traders, for lack of money, are forced to sell for survival and not for profit.”

But the “biggest impact”, says Julius Solomon, the director of external relations at Nigeria’s Overseas Chinese Service Centre has been the delayed return of thousands of Chinese traders and investors since Lunar New Year in February. The period of their travel coincided with Nigeria’s lockdown.

“Many of the traders and investors who travelled are still stuck back home in China. These are people who drive trading activities here. But none of them have returned to Nigeria and that partly accounts for reduced activities here,” says Solomon.

Between 40,000-50,000 Chinese live in Nigeria, Africa’s most populous nation, according to Zhou Pingjian, China’s ambassador. Some 160 Chinese companies employ more than 200,000 Nigerians, according to Ye Shuijin, the president of the China Chambers of Commerce in Nigeria.

In recent weeks however Nigeria’s authorities have started gradually easing restrictions to help boost the economy. Some markets in Lagos, including Chinatown, operate only on Mondays, Wednesdays and Fridays.

But recovery could take some time. The past few months has seen growing tensions between the local Nigerian and Chinese communities. A widely shared video on social media showed some angry Nigerian youths burning Chinese-owned shops and factories in neighbouring Ogun state after reports of racist attacks on Africans in China earlier this year. After that, Chinese reduced their presence in Chinatown and elsewhere to avoid potential trouble, locals say.

No such attacks, backlash or protests of the like were witnessed in Lagos Chinatown. Still, some Chinese were advised to stay away from public places and keep a low profile, according to Solomon. In part, that accounts for the reduced presence of Chinese at the reopened markets.

Rumours and fake news have also fuelled a false belief that Chinese were the main carriers of the coronavirus.

“Initially, so many of our buyers were really scared of coming here because of Chinese presence,” says Echelon. Even this morning, I still had to convince one of my customers that it is not unsafe to come around. Some buyers have completely avoided both this market and the Chinese people as well because of fear”.

There has been little evidence to suggest Chinatown was any less safe than elsewhere in Lagos. The atmosphere seems friendly, although it’s quiet. Here, there is a strict compliance to local health advisories, including the wearing of face masks.

Still, the pandemic is another blow for Chinatown, which has faced trouble since it opened in 2004. It was branded a hub for smuggled, fake and cheap Chinese products after authorities regularly raided it in its first decade.

That period saw the arrest of many traders. Shops were shut and those who had enough went back to China. The government said it wanted to limit smuggling and piracy – and protect the local textile industry from cheap Chinese goods. What followed was a ban on the import of Chinese clothes, and a massive exodus of traders from Chinatown to less targeted markets across Lagos and neighbouring Ogun state.

Since the vibrancy Chinatown was punctured, crackdowns rarely happen any more. But the losses are not easily reversible. Many businesses selling everything from ceramic coffee cups, mobile phones, laptop accessories, CDs and DVDs and stationary were either shut or forced to relocate.


Yet, one thing remained: that hurtful stigma, stacked against the great hope that marked the creation of the centre more than 15 years ago. It was to serve as one of the biggest symbols of China’s influence in Africa’s largest economy as well as a focal point for interaction between growing numbers of Chinese investors and Nigerians.

“We are really concerned with the fake products as that was the major reason why businesses in Chinatown had declined in recent times,” Liu Chang’an, the general manager of Chinatown told The Daily Sun, one of Nigeria’s top daily newspapers. “We are repositioning Chinatown to ensure that only genuine products are supplied and sold … and [it becomes] a hub for trade, investment, recreation, culture activities and food.”