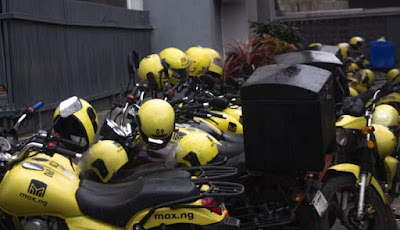 MAX.ng, a motorcycle-hailing and delivery service provider, has introduced its MAX Series M1 fleet of electric motorcycles in Nigeria.

The motorcycles were launched in Ogun State to ease transportation and boost economic activities in the state.

Chief Executive Officer, MAX.ng, Adetayo Bamiduro said the introduction of the electric motorcycles was in line with the firm’s commitment to make mobility safe, affordable and sustainable.

He said MAX.ng’s electric motorcycles had been in the works for over two years, culminating in a successful pilot after which improved models of the motorcycles were deployed.

According to him, MAX.ng is in partnership with Rubitec Nigeria Limited, a renewable energy company, to provide charging stations for the motorcycles.

He explained that the electric motorcycles use a battery-swap model that allows riders replace their depleted batteries with fully charged ones with the process taking less than five minutes, thus eliminating the wait-time for fueling traditional combustion engine motorcycles.

He noted that although in partnership with Asian and European partners, including Yamaha and Breakthrough Africa, the MAX M1 is an indigenous electric motorcycle, the first in the country.

Chief Executive Officer, Rubitec Nigeria Limited, Mr. Bolade Soremekun said MAX.ng has consistently shown that it is a company that takes its social responsibility seriously, in line with Rubitec’s desire to improve the standards of living of people in its communities and beyond.

“I am thrilled that this is happening here in Nigeria, especially considering the epileptic nature of power supply. It just shows that with innovation, we can overcome almost any challenge,” Soremekun said.

He said Gbamu-Gbamu was a trading community, but the market people had always had issues transporting their goods to major markets due to the high cost of transportation.

He noted that the MAX electric motorcycles would enable the traders to move their goods faster and at a reduced cost which would allow them to make more profit.

“They are more durable and cost-effective when compared to combustion-engine motorcycles and are therefore easier to maintain. Electric motorcycles are also eco-friendly and MAX.ng’s motorcycles have the added prestige of being manufactured in Nigeria for Nigerians,” Azodoh said.

He said MAX.ng is working with different partners to roll out electric vehicles into the Nigerian market and with the successful launch and deployment of the MAX Series M1, the company intends to mass-produce the vehicles with a target of reaching thousands over the next one year period.