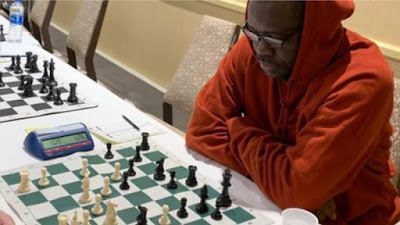 Nigeria's number one chess player, Oladapo Adu, is back to his home country after being stuck in Ivory Coast for four months and five days due to the coronavirus lockdown.

Adu had been stranded in the Ivorian capital Abidjan since 24 March, when flight restrictions and border closures left him stuck as he attempted to return home from the African Chess Championship.

"It’s nice to be back home - I feel relieved and happy this is all over. I have never had an experience like this in my life”, Adu told BBC Sport Africa.

Adu had travelled from the USA to Freetown, Sierra Leone, where he represented Nigeria at a zonal Chess Championship, which ended on 20 March.

But by this point the coronavirus outbreak had become a full-blown pandemic, leading to the ban on flights by countries and the closure of borders.

He had to stay with friends of another competitor from the tournament, Ivorian Simplice Delgundo, and later moved in with an Ivorian family.

"It was tough living with strangers in a strange land - having to depend on them for your survival," he said.

"But I am grateful to them. They took care of me for months even when it was not convenient for them."

Adu's return was finally secured through Nigeria’s ambassador to Ivory Coast, Mohammed Gana. He was prompted to intervene after several reports of Adu's case in the media.

He proceeded to arrange a return flight for Adu and 30 other stranded Nigerians in Abidjan.

"The ambassador said he was not aware of my situation until he got some pressure from Nigeria to get me out of Ivory Coast," Adu explained.

"He said my case had been on the news and he knew he had to intervene."

Adu, however, is said he was disappointed that the Nigerian Chess Federation had not spoken to him, despite enlisting him in the ongoing Online Chess Olympiad competition while still stranded in Abidjan.

“At the time I was enlisted, the Chess Federation did not even know of my whereabouts - I was still stranded in Abidjan when I was selected to represent Nigeria," he explained.

Nevertheless Adu is now participating in that online championship, which runs to 30 August.

The Nigerian Chess Federation did not respond to questions from the BBC.