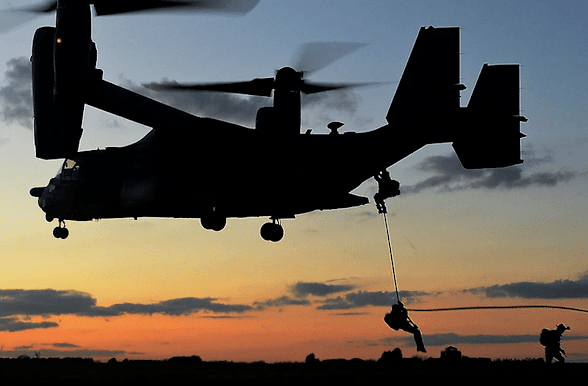 “They were all dead before they knew what happened.”
— US counter-terrorism source

Officials had feared the gang would sell him to terrorists operating in the region, and decided to act fast.

“US forces conducted a hostage rescue operation during the early hours of 31 October in Northern Nigeria to recover an American citizen held hostage by a group of armed men,” Chief Pentagon spokesman Jonathan Hoffman said in a statement.

“This American citizen is safe and is now in the care of the US Department of State. No US military personnel were injured during the operation.

“We appreciate the support of our international partners in conducting this operation.”

Walton had been taken captive in Niger on Oct. 26.

All but one of the seven captors were killed in the pre-dawn commando raid in neighboring Nigeria, ABC News reported.

The operation involved the governments of the US, Niger and Nigeria working together to rescue Walton quickly.

The operation was carried out under the veil of darkness, as members of Seal Team 6 jumped out of a USAF transport a few kilometres from where Walton was being held.

Members of the rescue team quickly hiked to the captors’ small encampment in a copse of scrubland bushes and trees, The New York Times reported.

In the brief but intense firefight that ensued and with surveillance drones buzzing overhead, all but one of the half-dozen or so kidnappers were killed, the NYT reported.

One captor escaped into the night. Walton was not harmed in the gun battle, and he walked out to a makeshift landing zone, where a US helicopter whisked him to safety.

Secretary of State Mike Pompeo said: “Thanks to the extraordinary courage and capabilities of our military, the support of our intelligence professionals, and our diplomatic efforts, the hostage will be reunited with his family. We will never abandon any American taken hostage.”

“These types of operations are some of the most difficult to execute,” he said.

Eric Oehlerich, an ABC News consultant and retired Navy SEAL, said Walton was “lucky” that such a mission was possible such as short time after he was abducted, when others have been held for years.

“Men in these top-tier special forces units train their entire adult lives to be ready when called upon, hostage rescue operations are inherently dangerous,” he said. “Those men put someone else’s life above their own, they do so selflessly… it’s an illustration of utter commitment.”

A former US counterterrorism official emphasized generally how long the odds are for rescue in the “highly dangerous” missions — less than 30%. But the official said that it’s crucial to act as quickly as possible so that hostages don’t wind up in the hands of al Qaeda or ISIS.

“The longer a hostage is held the harder it is to find an exact location to be able and conduct a rescue operation,” the official said.

Walton, the son of missionaries, lives with his wife and young daughter on a farm near Massalata, a small village close to the border with Nigeria.

Nigerian and American officials told ABC News that they believed the captors were from an armed group from Nigeria and that it was not considered terror-related. But hostages are often sold to terrorist groups.

This region of northwest Africa is home to multiple factions aligned with both ISIS and Al Qaeda, The War Zone reported.

One of these groups, Islamic State in the Greater Sahara (ISGS), was responsible for the infamous ambush of US and Nigerien forces outside the southwestern village of Tongo Tongo in 2017, which led to the death of four Americans and four Nigerians.

War Zone sources said the raid included the extremely long-distance movement of forces via multiple C-17A Globemaster III transport aircraft flights and the employment of a quartet of both CV-22B Osprey tilt-rotors and MC-130 special operations transports, the latter of which pushed through Rota, Spain, before continuing to their target.