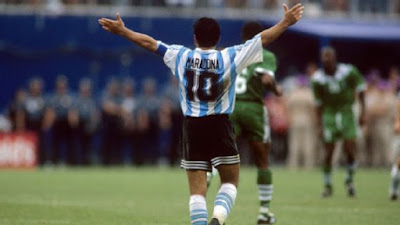 Nigeria was the last international opponent faced by the legendary Diego Maradona, at the 1994 World Cup in the United States, and members of that Super Eagles squad have paid tribute to the late football genius, adding their own insights into the man with whom they say they were honored to have shared a pitch.

Maradona, who died Wednesday at age 60 in Argentina, led his country almost single-handedly to the World Cup title in 1986, scoring what are considered to be the most infamous and greatest goals in the tournament's history.

His storied career with the Albiceleste came to an abrupt end against Nigeria in Foxborough, Massachusetts, near Boston.

The Super Eagles, making their first World Cup appearance, were brimming with confidence, having won the Africa Cup of Nations a few months earlier, and bursting at the seams with young, exciting talent around an experienced backbone.

But even they were awed by the legend of Maradona.

Midfielder Sunday Oliseh was tasked with the responsibility of keeping close tabs on Maradona, and he explained to ESPN the difficulty of the task.

"When I was playing at Standard Liege, I had a poster of Maradona on my wall with the Argentina team from the 1986 World Cup because, growing up, there were only two players that I could say that really made me dream each time I saw them play: That was Pele and Maradona," Oliseh told ESPN.

"He was going to be my direct opponent during the game. I knew that and so the night before, I went to bed early so I could rest and focus. When we got on the pitch that day, it was just that Nigerian mentality of never wanting to give up that helped me stand up to him. It took us about 10 minutes just to begin to figure him out, because his movement was so unpredictable. Even when he had his back turned to you, it was like he had eyes at the back of his head.

"So after about 10 minutes, I told myself there was only one solution; either brutalize this man or get humiliated. Luckily for me, I was slightly bigger and he was not a 26-year-old anymore. I think that was what helped me. So I can understand how those who played against him in '86 must have suffered.

"If you speak to anyone who has been on the pitch against Diego, they will tell you that he had something that you could never really put your finger on. You may call it an X factor, but it was more than that. It was something you can never describe in words."

Oliseh was 19 at the time, and he said it was an honour to have shared the pitch with Maradona, who was then 33. He says the experience helped him as a player.

"Having had the opportunity to play against him was a very special occasion for me," Oliseh told ESPN.

"Psychologically, it was after that game that I really had the confidence that I could go as far as playing in the biggest clubs in the world because, having been able to compete against him, with the esteem I held him at the time, and still hold for him, it means I could play against anybody."

Goalkeeper Peter Rufai, who conceded twice against Argentina, recalled the nonstop battle of wits that went on between Maradona and himself -- one he has no shame in conceding that he lost.

"He was always looking in my direction whenever he came close to the box," Rufai told ESPN.

"He had this way of always looking at me, always reading me but without making it obvious that he was doing it. Like he was measuring me, my position, and anticipating what I would do next.

"He was like a prowling lion, looking for breakthroughs, for opportunities to break into a solo effort.

"On my part, I kept one eye on him and one eye on the rest of the game. I was tracking him all through because his movement can be devastating. All it would take is one pass or one run so I tried to stay alert. I was always calling [Sunday] Oliseh, or Uche [Okechukwu] or [Augustine] Eguavoen to stay alert.

"Any time he got the ball, I knew it could be a game-changer. So as I watched him, I also tried to anticipate who was available in space for him to pass the ball to. It was an enjoyable tactical battle for me that we played in the field. I enjoyed playing that battle of wits with him all through the game."

Samson Siasia gave Nigeria the lead with a crafty goal, but the Argentines, inspired by whom else but Maradona, stormed back to win 2-1.

Argentina's winning goal was all about Maradona's quick thinking and guile, and Claudio Cannigia's execution.

Rufai explained the winner from his position in Nigeria's goal.

"When the free kick was given, I looked at him and saw him looking so I was trying to anticipate him making a long pass. And at the same time, I was checking my wall while I tried to use my peripheral vision to keep him in view. That was my mistake.

"The next thing I knew, he had disappeared, Cannigia was in front of me, and I saw the ball flying past me like a rocket into the angle.

"I knew it was gone and there was nothing I could do about it, but I just felt like I needed to do something and so I dived even though I knew it was hopeless.

"By the time I took off, the ball was already at its destination.

"It's a different kind of sadness," Oliseh told ESPN.

"It pains in a way that I cannot describe. It is a very strange feeling, like I felt when I heard about the death of [Nigerian soccer legend Stephen] Keshi.

"He was the best thing to happen to football. He modernized the sport, he transitioned from what Pele had done and took it to a modern level. I personally hold him and Pele as the greatest ever. They were originators, not imitators."

For 1994 African Footballer of the Year Emmanuel Amunike, another member of Nigeria's midfield in Massachusetts, Maradona's legacy will never fade.

"He was somebody that people like us looked up to as player. Watching him at the 1986 World Cup in Mexico was like magic. To have had the opportunity to play against him was a great privilege for me.

"He will always remain unforgettable, a legend and a great icon."