Nigeria is also losing control of its troubled northwest region 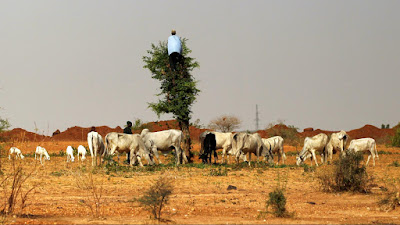 This month BBC’s Hausa language service which covers northern Nigeria reported a remarkable story of 12 Nigerian police officers being kidnapped along the Katsina-Zamfara expressway in the country’s northwest region. It was the latest in a growing list of attacks and kidnappings in Nigeria’s northwest that have often been underreported in Nigeria’s national media and almost hardly covered by the international media.

For the past decade and more, Nigeria has been battling Islamist terrorist group Boko Haram in an insurgency that has cost about 30,000 lives and displaced 2.3 million people in and around the northeast region of the country. The group, which has carried out attacks in the country’s capital Abuja as well as in neighboring countries Chad, Cameroon, and Niger, remains very active in the northeast even after splintering into the Islamic State West Africa Province (ISWAP) and the Jamaa’atul Ahlis Sunnah (JAS), with both carrying out attacks on civilians, aid workers, and the military.

However, for the past five years, the northwestern part of Nigeria has also become gradually engulfed by violence, with much less media coverage because these attacks have been carried out groups that have been described locally as “bandits”. These are not islamist terrorist groups with international affiliations which would more easily garner global media attentition.

Bandit is used here as a catch-all term to describe numerous groups that have carried out vicious attacks on local communities, killing scores of people, and have also been kidnapping as many as they can for ransoms. Zamfara, Katsina, and Kaduna states are the epicenters of the growing crisis.

The genesis of the lawlessness is not as clear-cut as the Boko Haram insurgency as it is a combination of various factors.

The northwest region makes up just over a quarter of Nigeria’s landmass and is composed of seven states, including some of Nigeria’s poorest. Zamfara and Sokoto have high poverty rates like in the northeast. But unlike the northeast, the northwest region is more homogenous in terms of ethnicity and religion: with the exception of the southern part of Kaduna State and parts of Kebbi State, it is mostly peopled by the Hausa and Fulani ethnic groups, and mostly Muslim.

Most of the actors are Fulani, the ethnic group that spreads across West Africa and is known for being nomadic pastoralists, while the communities being attacked are mostly Hausa farming communities. The current violent dynamic started soon after vigilante groups formed from the Hausa communities for security purposes carried out extrajudicial action against Fulani pastoralists as tensions mounted from increasing competition for land and water resources between the pastoralists and the farmers as the effects of climate change exacerbate.

This has all coincided with an increase in cattle rustling in the regionby armed gangs, again mostly Fulani, using increasingly sophisticated weapons and staging attacks from nearby forests. It is these gangs that have now been attacking communities and killing indiscriminately in a bid to exact revenge. There is also a nexus between the banditry and illegal gold mining in Zamfara state, with the miners accused of being collaborators but have also fallen victimsto the armed gangs.

“The population in the state, which is mainly made up of herders and farmers, have been affected heavily as they have been unable to carry out their economic activities,” says Yusuf Anka, a political commentator based in Gusau, Zamfara’s state capital. “There is arbitrary taxation on the communities by the bandits before they can plant and harvest crops. Everyone in Zamfara has suffered a personal loss to this banditry.”

Given there is very little or even no state presence in most parts of the northwest region beyond its state capitals and major towns, it has become very easy for non-state actors to run rampant in the deep rural areas. It is made worse by the fact the nearby national border in the region is very porous and for many years has become a conduit for smuggling illicit drugs, weapons, and even humans. Together with a high rate of unemployment and poverty, these factors have served to ignite and sustain the seemingly unending cycle of violence.

“It has been terrible in Zandam in the Jibia local government area of Katsina state, where we’ve experienced about five attacks in the last year,” says Gidado Suleiman Farfaru, a local civil society activist in Katsina. “All the resources of the community have been wiped out.” He said three people were killed in these attacks; and another nine people have been reported as kidnapped.

An uncertain calm has returned to the farms and surrounding areas after the government sanctioned the deployment of 60 mobile policemen in the village for the last two months, says Farfaru. The BBC story of the police kidnapping highlights the risk for even uniformed security officials.

But the disruption is not limited to rural areas anymore as there have been numerous kidnappings on major highways in the region and even attacks in cities: for example, traveling on the 190-kilometer expressway linking Nigeria’s capital Abuja and Kaduna is fraught with risk due to the high rate of attacks on travelers. This has made the train link the safer choice for traveling and even an air shuttle servicebeing mooted.

“The deteriorating state of security in the region has also provided opportunities for jihadist groups to take advantage,” says Murtala Abdullahi, a climate, conflict, and security reporter with Humangle News. “There have been reports of the Boko Haram factions trying to extend their reach from the Lake Chad region while groups active in neighboring countries such as Mali, Niger Republic, and Burkina Faso are getting increasingly active close to the region.”

The insecurity is also impacting Nigeria’s agricultural production and food security with more farmers abandoning their farms due to fears of being attacked.

“The insecurity in the northwest is causing significant problems for farmers. In many areas, they now pay bandits to have access to their farms in order to harvest—with fees often ranging in the hundreds of thousands of naira,” says Ikemesit Effiong, the head of research at SBM Intelligence, a geopolitical consultancy based in Lagos. “Even with this quasi-taxation, security is not always guaranteed.”


Effiong is worried about a fast deteriorating situation. “Food insecurity is now a national emergency and the federal and state governments in the northwest need to urgently and closely cooperate to re-establish an adequate security presence in farming areas, so normal activities can resume.”

To be clear, in its efforts to restore security to the region, the Nigerian government has launched numerous military operations over the past four years but with an overstretched military that is deployed in multiple concurrent operations across the whole country, the impact of these operations has been very limited.

“Military approach is important but it needs to be done in a way that is not excessive and targets only the right persons,” says Abdullahi. “Other approaches need to be utilized as well, addressing surrounding issues such as justice, rural development, and state presence, and improving livelihood.”


Other approaches such as a peace deal brokered with the bandits by state governors in the region only held together for a few months before it collapsed, leading to at least one state officially pulling out of the deal. This is likely due to the fragmented nature of the actors in the conflict with so many groups involved such that it is hard to have an agreement binding on all of them.

Related stories: Conflict between Herdsmen and farmers in Nigeria escalates

Video - The war between farmers and cattle herders in Nigeria