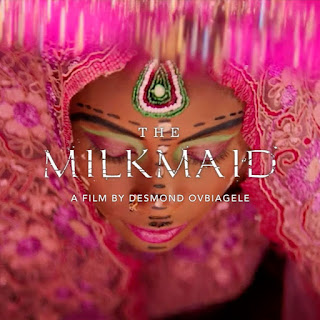 When the Nigerian Official Selection Committee sat down to select Nigeria’s nominee for the 2021 Academy Awards last December, the jury voted overwhelmingly for Desmond Ovbiagele’s film The Milkmaid over the sex-trafficking drama Oloture and film festival toast Eyimofe.

Unlike Genevieve Nnaji’s Lionheart which the Academy disqualified from the international feature film category last year for having English as the main language of the script, The Milkmaid fulfils the requirement for a predominantly non-English dialogue track. It conveys authenticity with Hausa, Fulfulde and Arabic, three languages hermetically spoken throughout the film.

The film follows the story of two sisters, Aisha (Anthonieta Kalunta) and Zainab (Maryam Booth), who get separated when insurgents attack their village. Aisha is determined to rescue Zainab from her captors and traces her whereabouts to an enemy camp, where she is enslaved and treated inhumanely.

A sophomore feature from Ovbiagele after his 2014 crime thriller debut Return to Caesar, The Milkmaid is a compellingly superior entry into Nollywood’s Boko Haram-themed cinema.

The genre is relatively new, inspired by the Boko Haram insurgency in Northern Nigeria, which began its deadly uprising in 2009 and has claimed the lives of more than 37,000 people and displaced 2.5 million. Most of these films are not made to be box office hits as they usually employ largely unknown actors, so they sail under the radar.

But with Joel Kachi Benson’s Daughters of Chibok winning a Golden Lion at the 2019 Venice Film Festival and Netflix picking up Adekunle Adejuyigbe’s The Delivery Boy a year later, the genre is slowly occupying an expanding space in the public imagination and has set off some conversations about violence in society.

Tackling such sensitive issues as religious extremism and violence, The Milkmaid has predictably faced censorship at home. The Nigerian Film and Video Censors Board (NFVCB), the government agency whose mandate is to regulate the creation, distribution and exhibition of films and video products by rating them, denied the film classification because it felt it portrayed Islam as an enabler of religious extremism.

To obtain a classification for pubic screening in Nigeria, 24-minutes-worth of footage was cut from the director’s original version. “We had to remove everything – costume, dialogue, language that was an authentic depiction of a particular religion, even though there is nothing in the film that states that the religion was directly responsible for violence,” Ovbiagele said in a December 2020 interview.

The Milkmaid’s censorship was to be expected, considering the NFVCB’s history of stifling artistic freedom and paranoia that films can threaten national unity. The film does not suggest Islam inspires extremism and it also does not glorify terrorists and whatever their motivations are. Rather it exhumes the traumatic experiences of women and girls in a world blighted by insurgency. Although the film is yet to do a wide release, the response from the members of the Muslim community who have seen it at private viewings has been positive.

Because of censorship at home, The Milkmaid turned to Cameroon and Zimbabwe for its theatrical release in November, then went on a limited run with its toned-down cut in select Nigerian cinemas in afterwards. Garnering local buzz, the motion picture swept last year’s Africa Movie Academy Awards with eight nominations and four awards, including Best Film.

For the Oscars, Ovbiagele sent the film’s original version, which contains all the elements of a potential winner: a compelling story, captivating actors’ performance and masterful cinematography.

Through Ovbiagele’s deft handling of the camera, audiences can see how beauty tightly intertwines with violence, creating a stunning artistic patchwork. This visual language is defined by the crisp cinematography of Yinka Edwards whose technical detailing does not just dwell on scenery but also within interpersonal spaces.

At the core of that is a feminine reckoning with extremism and its fallouts – the abduction of women and girls, violence and enslavement.

There is something particularly auspicious about The Milkmaid’s Oscar campaign footprint. But will it appeal to the Academy?

Aside from its obvious artistic merit, the Oscar fate of The Milkmaid will be determined by how the Academy voters – representing the American audience – see anti-terrorism messaging almost 20 years after the start of the US “war on terror”.

Like Nollywood, Hollywood too has experienced a boom in the production of films inspired by the themes of extremism and insurgency. A few have even made it to the Oscars and won.

The genre has successfully propelled the US government narrative of its forces fighting foreign terrorism and restoring stability to faraway conflict-torn regions and has done little to illuminate the disastrous consequences of US anti-terror-driven imperialism.

Although it does not tackle the international aspect of the Boko Haram insurgency, The Milkmaid fits well into this mainstream US narrative about terrorism. Its story would feed into the American viewers’ self-righteous disdain for overseas terrorist groups and will probably be well received. Whether this is what the Academy will be looking for in this year’s international film feature category remains to be seen.