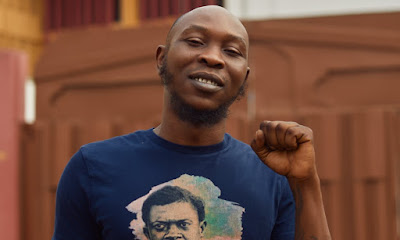 “For 60 years nothing has really been solved in this country,” Seun Kuti says. “Healthcare, education, electricity, transportation, welfare – nothing has been accomplished.”

Galvanised by the brutality meted out by Nigerian police against protesters in October last year, the 37-year-old Grammy-nominated musician and youngest son of the Afrobeat legend Fela Kuti resurrected his father’s socialist political party, the Movement of the People. Against a backdrop of widespread and mounting frustration over how Nigeria is run, he hopes the MOP can be a vehicle for change in 2021.

The “weird” past year was, he says, compounded by peculiarly Nigerian challenges. In October Kuti marched alongside thousands of others in the #EndSars protests against police brutality, nursing the wounds of shot demonstrators. The protests, some of the largest in Nigeria for decades, erupted after footage emerged of police brutality by the notorious Sars unit. But the underlying causes were broader, Kuti says. “The people made it known that EndSars was a slogan. How I interpreted it was they wanted an end to oppression, not just a manifestation of it that is Sars.”

More recently, he lost his band leader, Dave Obayendo. “We couldn’t even tell whether it was Covid or not, he wasn’t tested,” Kuti says. “The hospital turned him back. Before they took him to the next hospital, he died in the car.” The rejection of patients by hospitals is rife, he says, sometimes for issues such as a lack of adequate equipment.

The MOP was founded in 1979 by Fela before his sole, failed presidential bid, one episode of an extraordinary life of music and resistance during which he faced near-endless violence and suppression by Nigerian authorities.

According to Kuti, the prospects for anti-establishment parties, though still remote, are better now. “Today it will be easier for such a message to reach the core of Nigerian people than it was in the 70s. The problems are so glaring,” he says. “Elites have imposed this sinister, anti-poor capitalist system, going on for years and years, but are people really in favour of it? How can you be a capitalist with no capital? You’ll begin to see that the system is rigged.”

Kuti hopes the new version of the MOP, which brings together an array of small leftwing activist groups, will more effectively articulate these issues, “giving the masses a voice and building class consciousness”. But he scoffs at the prospect of a presidential run and says the group’s aims are long-term. “No, that’s not me. I’m an artist. But we will have candidates across the country for sure,” he says.

“The military hierarchy has consistently made sure that they are the ones in power, we have to put an end to it. We have to build a mass movement from the grassroots up, giving ordinary Nigerians a platform.”

A bleak sense of deja vu feels hard to ignore in Nigeria. In the 1980s Muhammadu Buhari, who is now the president, was a military dictator and a prime target of Fela’s ceaselessly political songwriting. Then as now, economic suffering, a weakening currency and a flailing anti-corruption campaign were causing widespread dismay.

The killing of scores of protesters by army and police officials in October, including at the Lekki tollgate area of Lagos, was one of several episodes where protesters and critics were attacked, arrested or met with state aggression.

“During one protest a guy came to my house who had a gunshot wound in his side like this,” Kuti says, gesturing to his torso. “People talk about the Lekki massacre but they shot people everywhere, people were shot to death all over Lagos.”

MOP’s first meeting was due to be held in December at Fela’s old club, Afrika Shrine, a bohemian enclave where he often performed. But scores of armed police surrounded the building and banned them from organising, so the meeting was held elsewhere.

“It just shows that they [the authorities] are spooked,” Kuti says. “They are trying to send a message, but they can’t stop what we’re doing.”

Rolling joints with his own self-branded rolling paper, Kuti describes how the absence of touring over the last year has been hard. “I miss my band, we had plans last year that were cancelled, but I’m hopeful we’ll start things up again this year,” he says. Playing his saxophone, he says, brings him joy.

Although music, family, and new business ventures to offset the lack of performing are time-consuming, political change is front of mind.

“Maybe it can be hard to be hopeful but I’m hopeful, Kuti says. “We want to set up different ways of reaching out to the masses because frankly they are ignored. We can’t bring change without the people, so giving them a voice is the most important thing.”

Video - Femi Kuti reflects on a life in music and activism