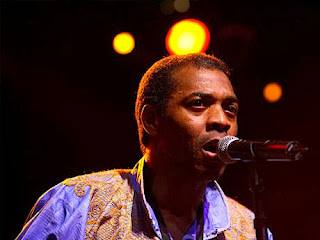 Once again Nigeria’s Afrobeat icon Femi Kuti has been norminated in the Best World Music Album Category of the 56th Annual Grammy Awards which will place on the 14th of January next year.

The National Academy of Recording Arts & Sciences releases the list for the 56th Annual Grammy Awards last week for recordings released during the Eligibility Year October 1, 2012 through September 30, 2013.
Femi Kuti’s album ‘No Place For My Dream’ was nominated for the 2014 Grammy Awards in the “Best World Music Album” Category.
Femi Kuti of Nigeria , Indian musician Ravi Shankar, French group Gipsy Kings and South African group Ladysmith Black Mambazo are in contention for award in this category
The last time he was nominated in 2012 Femi Kuti had said that he will never attend the Grammys again. And that if he wins let them bring it to him in Africa.