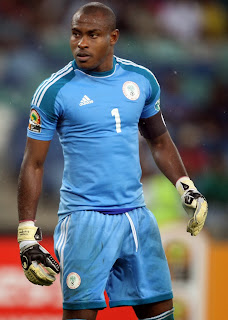 Vincent Enyeama stayed in top form to help 10-man Lille win 1-0 away at Valenciennes on Saturday after Franck Beria was sent off.

The Nigerian has now gone 945 minutes without conceding a goal as Lille have not lost in 10 matches. He is closing in on the Ligue 1 record of 1,176 minutes held by Gaetan Huard during the 1992-93 season with Bordeaux.

He was voted the best player in the French top flight for the month of October.

Substitute Ronny Rodelin scored the only goal for Lille in the 47th minute.

"It wasn't easy, I think we went through every type of emotion," Lille coach Rene Girard told media.

"Ten matches in a row without conceding a goal, that's a first in my career," added Girard.

"It shows the character of this team."

Lille are in the top three behind Monaco and PSG.