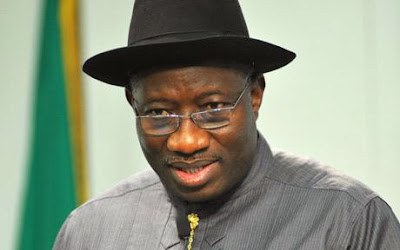 Nigerian President Goodluck Jonathan's office has hit back at ex-leader Olusegun Obasanjo for a "provocative" letter condemning his leadership.

In the leaked letter, Mr Obasanjo warned Nigeria could slide back to military rule because of Mr Jonathan's failure to tackle myriad problems.

It would be "morally flawed" for him to seek re-election in 2015, he added.

Mr Obasanjo's attack - the harshest since he stepped down as leader in 2007 - was a clear attempt to thwart Mr Jonathan's chances of being nominated again as the governing People's Democratic Party's (PDP) candidate for the 2015 poll, correspondents say.

'Highly unbecoming'
The PDP has been hit by serious in-fighting ahead of the election.

A powerful faction of state governors have broken away to join the opposition All Progressives Congress (APC).

The PDP now has fewer governors supporting it than the opposition.

In the 18-page letter widely covered in the local media, Mr Obasanjo accused Mr Jonathan of failing to deal with the many problems facing Nigeria - including corruption, piracy, kidnapping and oil theft.
"I want nothing from you personally except that you should run the affairs of Nigeria not only to make Nigeria good, but to make Nigeria great for which I have always pleaded with you and I will always do so. And it is yet to be done for most Nigerians to see," Mr Obasanjo wrote.

He added that he was speaking out because he was concerned that Nigeria was moving in the wrong direction.

"I could sense a semblance between the situation that we are gradually getting into and the situation we fell into as a nation during the Abacha era," he said, referring to ex-military ruler General Sani Abacha.

He jailed Mr Obasanjo for allegedly plotting a coup against him and ordered the execution of leading human rights activist Ken Saro-Wiwa.

Mr Jonathan's spokesman Reuben Abati said it was "highly unbecoming, mischievous and provocative" to leak the letter to the media and it was a deliberate effort to "impugn the integrity of the president".

Mr Jonathan would respond in due course to "the most reckless, baseless, unjustifiable and indecorous charges levied against him and his administration", Mr Abati said, in a statement.

Mr Obasanjo, a former military ruler, won democratic elections in 1999 and 2003 on the platform of the PDP.

The PDP has won every national election since the end of military rule in 1999.

Mr Jonathan moved from the vice-presidency to the presidency in 2010 after his predecessor, Umaru Yar'Adua, died in office.

He won elections the following year.