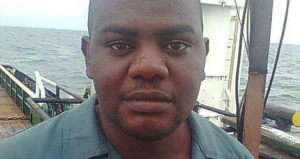 Ship's cook Okene, 29, was on board the Jascon-4 tugboat when it capsized on May 26 due to heavy Atlantic ocean swells around 30 km (20 miles) off the coast of Nigeria, while stabilizing an oil tanker filling up at a Chevron platform.

Of the 12 people on board, divers recovered 10 dead bodies while a remaining crew member has not been found.

Somehow Okene survived, breathing inside a four foot high bubble of air as it shrunk in the waters slowly rising from the ceiling of the tiny toilet and adjoining bedroom where he sought refuge, until two South African divers eventually rescued him.

"I was there in the water in total darkness just thinking it's the end. I kept thinking the water was going to fill up the room but it did not," Okene said, parts of his skin peeling away after days soaking in the salt water.

"I was so hungry but mostly so, so thirsty. The salt water took the skin off my tongue," he said. Seawater got into his mouth but he had nothing to eat or drink throughout his ordeal.

At 4:50 a.m. on May 26, Okene says he was in the toilet when he realized the tugboat was beginning to turn over. As water rushed in and the Jascon-4 flipped, he forced open the metal door.

"As I was coming out of the toilet it was pitch black so we were trying to link our way out to the water tidal (exit hatch)," Okene told Reuters in his home town of Warri, a city in Nigeria's oil-producing Niger Delta.

"Three guys were in front of me and suddenly water rushed in full force. I saw the first one, the second one, the third one just washed away. I knew these guys were dead."

What he didn't know was that he would spend the next two and a half days trapped under the sea praying he would be found.

Turning away from his only exit, Okene was swept along a narrow passageway by surging water into another toilet, this time adjoining a ship's officers cabin, as the overturned boat crashed onto the ocean floor. To his amazement he was still breathing.

FISH FEASTED ON THE DEAD

Okene, wearing only his underpants, survived around a day in the four foot square toilet, holding onto the overturned washbasin to keep his head out of the water.

He built up the courage to open the door and swim into the officer's bedroom and began pulling off the wall paneling to use as a tiny raft to lift himself out of the freezing water.

He sensed he was not alone in the darkness.

"I was very, very cold and it was black. I couldn't see anything," says Okene, staring into the middle distance.

"But I could perceive the dead bodies of my crew were nearby. I could smell them. The fish came in and began eating the bodies. I could hear the sound. It was horror."

What Okene didn't know was a team of divers sent by Chevron and the ship's owners, West African Ventures, were searching for crew members, assumed by now to be dead.

Then in the afternoon of May 28, Okene heard them.

"I heard a sound of a hammer hitting the vessel. Boom, boom, boom. I swam down and found a water dispenser. I pulled the water filter and I hammered the side of the vessel hoping someone would hear me. Then the diver must have heard a sound."

Divers broke into the ship and Okene saw light from a head torch of someone swimming along the passageway past the room.

"I went into the water and tapped him. I was waving my hands and he was shocked," Okene said, his relief still visible.

He thought he was at the bottom of the sea, although the company says it was 30 meters below.

The diving team fitted Okene with an oxygen mask, diver's suit and helmet and he reached the surface at 19:32, more than 60 hours after the ship sank, he says.

Okene says he spent another 60 hours in a decompression chamber where his body pressure was returned to normal. Had he just been exposed immediately to the outside air he would have died.

The cook describes his extraordinary survival story as a "miracle" but the memories of his time in the watery darkness still haunt him and he is not sure he will return to the sea.

"When I am at home sometimes it feels like the bed I am sleeping in is sinking. I think I'm still in the sea again. I jump up and I scream," Okene said, shaking his head.

"I don't know what stopped the water from filling that room. I was calling on God. He did it. It was a miracle."