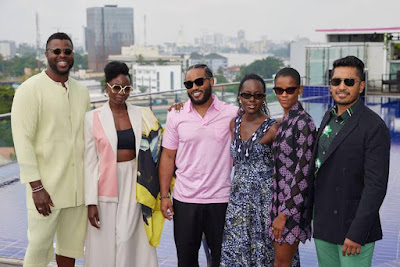 Some cast and crew members of Black Panther: Wakanda Forever, are in Lagos, Nigeria, ahead of the first-ever Marvel Studios’ premiere on 6th November.

The group is visiting Nigeria for the first time to kick off continent-wide celebrations ahead of Black Panther: Wakanda Forever‘s release on 11 November.

‘Black Panther: Wakanda Forever, a sequel to the 2018 box office hit movie, ‘Black Panther 2, is an American action superhero film based on the Marvel Comics character.

The film is a part of the Marvel Cinematic Universe (MCU), written by Ryan Coogler and Joe Robert Cole and directed by Ryan Coogler. It continues with the story of T’Challa, the king of Wakanda.

On Sunday morning, some cast and crew members were present at a press conference held at Lagos Continental Hotel, where they fielded questions from the media.

At the occasion, the film director, Coogler, recipient of four NAACP Image Awards, four Black Reel Awards and an Academy Award nomination for Best Picture, justified why the cast and crew decided to kick off the continent-wide celebrations ahead of the film’s release in Nigeria.

Coogler, an African American, said Lagos has a lot of history and cultural significance for filmmakers. He also informed the ecstatic audience that he recently took a genealogy test that revealed his lineage.

‘‘If you know, like African American history, it’s tough for us to trace our genetic lineage due to some purposeful things that happened to us during the transatlantic slave trade.

So one of the things I spoke with the late Chadwick Boseman about when we first met and were getting ready to put his movie on was that he put me up on something called africanancestry.com, another company I like.

It was specific about finding out where you have a heritage to know. So Chad had done his own, and he explained how it is done. So when I did mine, it came back as having lineage to a part of Cameroon, but mainly Yoruba lineage. It was something that I held on to and always wanted to know, to travel to Nigeria for that reason.”

The 36-year-old filmmaker said different parts of Africa influenced the film; however, the Nigerian culture exudes a specific energy that is hard to ignore.

In addition to the already-released Rihanna single “Lift Me”, co-written by Tems, the soundtrack features other Nigerian artists Burna Boy, Tems, Fireboy DML, Ckay, Rema, Tobe Nwigwe and Fat Nwigwe, amongst other African acts. The media asked the team why they featured several Nigerian and African artistes on the soundtrack album.


Responding, Coogler, who produced the album, said his team wanted a representation of various genres and music spaces on the album.

‘‘I mean, music is critical to film as a medium. The film is a combination of a lot of different mediums. For me, Sonic manipulation, I’m trying to get a form of sound design, production design at, like, all of these things, you know, all the artboards representing the music is a massive part of it.

‘‘And the music was a big part of the first field. We were able to line up a great collaboration. And we wanted to do something different on this particular project, where to get, you know, more into the continent. We want a representation from various genres and music spaces,’’ he said.

Black Panther: Wakanda Forever is one of the most highly anticipated films of the year. It is the sequel to Black Panther (2018), starring Chadwick Boseman, who died two years ago of Colon Cancer at 43.

As the Wakandans strive to embrace their next chapter, the heroes must band together with the help of War queen Nakia (Lupita Nyong’o) and Everett Ross (Martin Freeman) to forge a new path for the kingdom of Wakanda.