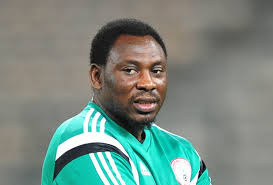 Former Super Eagles coach, Daniel Amokachi, has secured a one-year deal to handle Finnish side, JS Hercules, and is to resume immediately with the team.

The Finnish second division side, on their official website on Wednesday, announced the hiring of Amokachi and the other reshuffling in their technical crew.

“The head coach for the previous season Pekka Haaranen will continue as assistant coach. Amokachi’s agreement with Hercules is one year,” the club stated.

Amokachi, who had a short stint as interim manager for the national team, was an assistant coach to Stephen Keshi when Nigeria won Africa Cup of Nations in 2013.

The last coaching job for the former Everton and Besiktas of Turkey player was a short spell with Nigeria Professional Football League (NPFL) side, FC Ifeanyi Ubah, which ended abruptly barely few weeks after the celebrated move.

Hercules, who are based in Oulu, Finland, were recently promoted to the Finnish second tier and will hope for more upward swing under their new Nigerian manager, Amokachi.

While Dan the Bull as Amokachi is fondly referred to, enjoyed much success as a player, he is yet to hit it big in coaching.