Nigerian comic startup creating its own universe of superheroes 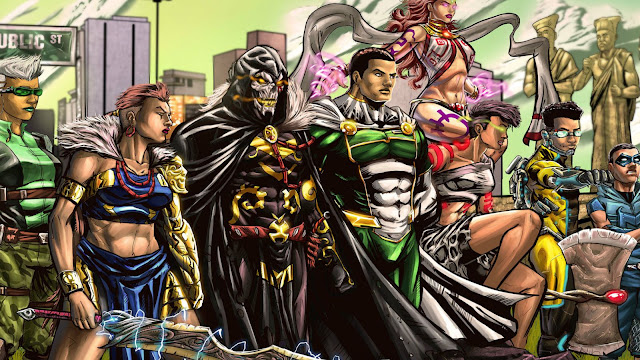 Comic Republic, a Nigerian comics startup based in Lagos, is creating a universe of superheroes for Africans and black readers around the world. The cast of characters—”Africa’s Avengers” according to some fans—ranges from Guardian Prime, a 25-year old Nigerian fashion designer by day who uses his extraordinary strength to fight for a better Nigeria, to Hilda Avonomemi Moses, a woman from a remote village in Edo state who can see spirits, and Marcus Chigozie, a privileged but angry teenager who can move at supersonic speeds.

“I thought about when I was young and what I used to make my decisions on: What would Superman do, what would Batman do? I thought, why not African superheroes?” Chief executive Jide Martin, who founded the company in 2013, told Quartz. Its tagline is, “We can all be heroes.”

The startup may be a sign that comics are having a moment on the continent as well as in a market once said to lack interest in African-inspired characters. The nine-person team has seen downloads of its issues, published online and available for free, grow from a couple hundred in 2013 to 25,000 in its latest release last month as the series has become more popular. Comic Republic plans to make money from sponsorships and advertisers.

So far, companies have asked Comic Republic to create comics for their products and NGOs have asked for help illustrating public health risks like malaria. The head of one of the country’s largest e-commerce outfits, has asked for a portrait of himself rendered as a superhero. The story of one the characters, Aje—Yoruba for “witch”—may be made into a movie by a local filmmaker. Another edition of Guardian Prime’s story is scheduled for this month.

The startup is part of what some say is a renaissance of made-in-Africa music, literature, and art that resonate beyond the continent. Over half of Comic Republic’s downloads are from readers in the United States, the United Kingdom, and a scattering are from other countries like Brazil and the Philippines. About 30% come from Nigeria, according to Martin. Lagos now hosts an annual Comic Con for the comic and entertainment industry. Kenya hosted one for the first time in 2015.

The comic book industry has potential in Africa in part because of the popularity of superhero-themed films, Martin points out. His company launched with Guardian Prime, “a black Superman,” he says, on the same day as the 2013 premiere of Man of Steel.

Other African characters have already emerged. A popular South African comic, Kwezi, or “star” in Xhosa and Zulu, created by designer and artist Loyiso Mkize, follows a teenage superhero in Gold City, a metropolis imagined after Johannesburg. The comic, which features plenty of local slang and cultural references, is a “a coming of age story about finding one’s heritage,” according to Mkize. Nigerian animator Roye Okupe’s graphic novel, E.X.O: The Legend of Wale Williams released in August, is meant to “put Africa on the map when it comes to telling superhero stories,” according to Okupe.

Comic Republic’s universe of heroes differs from its Western peers in other ways. Of the nine characters created by Comic Republic, four are women, which Martin believes is a reflection of the fact that women are active in politics and business circles. “Today’s Nigeria, we’re very indifferent to whether someone is a man or woman. I wouldn’t say there was any strategic decision. It’s just a way of life for us,” he said.

Beyond battling evil and saving the day, the comics are meant to show how individuals can come together to provide for a “better safer Africa,” chief operations officer, Tobe Ezeogu said in November.

That message appears to be getting across to some readers. One fan wrote on Comic Republic’s Facebook wall of its flagship character, Guardian Prime, “My favorite quote [by him]: ‘All it takes for evil to succeed is for good men to stand by and do nothing. I won’t stand by. I am Nigerian.’ I’m not Nigerian, but heroes are going to help the youth and stimulate patriotism.”