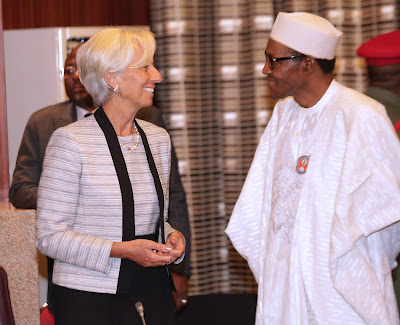 After her meeting with President Buhari at the presidential villa, she a‎ddressed a brief press conference during which she outlined her organisation’s concern for the Nigerian economy, and the help she is offering.

PREMIUM TIMES’ Sani Tukur was at the session, and below is a full tra‎nscript of the briefing.

"The last time I was in Nigeria was years ago. Since then, many things have changed. That was the topic of our discussion with President Buhari and his team. Massive democratic change has occurred in the country, peacefully. Nigeria has become the largest economy in Africa, certainly the most populated and attractive market."

"But, change has come in a more complicated way, in the sense that the source of revenue for Nigeria, which was predominantly oil, has seen its prices divided by more than half, and the financing cost are beginning to rise, if only the economic situation of the United States has improved and interest rates are beginning to rise."

"Also, emerging markets are decelerating their growths and they are no longer going to contribute to the massive growth that they have been doing over time."

"It’s in that context of a great Nigeria, which a leader in Africa is, that we had this excellent discussion with President Buhari."

"We discussed the challenges ahead, starting from the oil price reduction, the necessity to apply fiscal discipline, and the need to also respond to the population needs by addressing the medium term necessity of improving the competitiveness of Nigeria."

"Also, focusing on the short-term fiscal situation, which requires that revenue sources be identified, in order to compensate the short-fall, resulting from the oil price decline."

"Oil revenue itself is not the major contributor to Nigeria’s gross domestic product, GDP. It is only about 14 per cent, but it’s a big source of revenue for the government."

"We had a good chat with the President and Vice President, along key ministers, including the Ministers of Finance and Budget on how more efficiency, transparency and better accountability could be achieved; enlarging of the revenue base could actually contribute to sound budget going forward."

"I cannot comment on the budget here and now, because we have a procedure in the IMF under which a team of economists would come next week to do what we call the Article 4, which is the review of the budget."

"The group will hold discussion between the IMF on the one hand and the country’s authorities on the other hand. They would look at whether the debt is sustainable, whether the borrowing costs are sensible, and what strategy must be put in place in order to arrest charges going forward."

"What I actually mentioned to President Buhari was that his fight and his determination to fight corruption and bring back transparency and accountability at all levels of the economy were very important agenda items, and a very ambitious goal that need to be deliberated upon. He himself is definitely committed to that as he indicated."

"We would be discussing with the Central Bank about issues of fiscal discipline, financing, monetary policy and the degree of flexibility."

"Nigeria with a vibrant and large economy still has to deal with a lot of poor people with a lot of inequality. Those two components should always be the drivers of reforms. Whether it is looking at subsidy, and how they are structured and how they can be phased out; whether it is monetary policy and the flexibility needed, and how all that impact on the poor. All of those are additions, which we completely recognize and support."

"To those of you who wonder why the Managing Director is visiting Nigeria, it is precisely to have a good discussion with the Nigerian government about these new objectives, these reform agendas that have been identified and also to appreciate the impact that it will have on neighbouring countries, because when you have a very large economy like Nigeria, anything that it decides, any hardship that it faces, would actually have consequences around it. That is certainly what our research and analytical work is demonstrating."

"Nigeria is one of those that actually have impact not just on itself and its people, but also around it and its neighbours."

Q: How much longer do you think Nigeria’s weak current account position can sustain the economy, which is due largely to the dwindling price of crude oil; and were there talk about loans; when people hear of IMF, their heart skip a bit because IMF is coming again with loans and conditionalities. Were there also discussions about the devaluation of the Naira and the deregulation of petroleum pump price?

Lagarde: First of all, let me be very clear. I am not here, nor is my team here to negotiate a loan with conditionalities. Frankly, at this point in time, given the determination and the resilience displayed by the President and his team, I don’t see why an IMF programme would be needed here.

Of course, discipline is going to be needed; implementation is going to be key, but the objectives and the ambition will serve the country well in order for it to be actually sustainable.

On the current account front, we believe that with the very clear ambition to support the poor people of Nigeria, there could be added flexibility of the monetary policy, particularly, if as we think, the price of oil is likely to be low for longer, because clearly, the authorities should not deplete the reserves of the country.

Q: In developing nations, when IMF sneezes, we catch cold, because we believe that the IMF does not represent the interest of the poor. When you come and talk, you sound very well, but when we key into the policies, our nation and our people don’t get the best out of it. What assurances are you going to give us that if we buy into IMF policies, advice and policy thrust, we are not going into a situation where the poor will get poorer, and the very rich boys will smile to the bank?

Lagarde: If I may say, I think you have a slightly outdated view of the IMF. Certainly, in the last four and half years that I have been Managing Director of this institution, this is not the recipe that we have recommended and certainly this is not the feedback that I have received from the countries with which we partner.

I just want to point out one thing, we are essentially in three lines of activity.

The first one, which is the most traditional one, is under which we give policy advice to our members. We have currently 188 countries that are members of this institution.

It is our duty and our accountability to them to review their economy every year, to give them status report independently without pressure. We don’t do what is necessarily going to please them. We say things as we see them.

The second activity, which is the fastest growing one in the institution, is technical assistance and capacity building, and there is plenty of that available to all the countries of the world.

You may be surprised to know that about 150 countries have had the benefit of technical assistance and capacity building.

The third activity, which is probably the one you are referring to, is the lending that we provide, because we are also prepared to provide lending to countries, whether the balance of payment is in a bad situation and no financing is available.

At that point in time, in order to bail the country out of that difficult position that it is in, then we come in and we lend.

We do that, but we don’t do as much now, as we do four years ago. But like I said earlier on, I am not here to negotiate a programme at all.