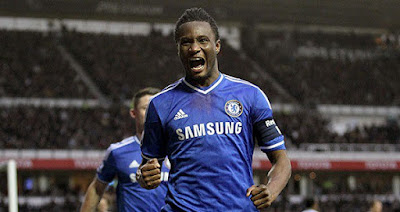 English football giants, Chelsea Football Club have celebrated the 10-years stay of Nigeria’s Super Eagles captain, John Mikel Obi with the club. The club posted a video on its official website to celebrate the 29-year old.

Mikel joined the Stamford Bridge outfit from Lyn Oslo of Norway in the Summer of 2006 after a controversial transfer saga with Manchester United also claiming to have signed him ahead of Chelsea.

The then 19-year-old Mikel made his debut for Chelsea in the UEFA Champions League on 12 September 2006, against Bulgarian club Levski Sofia. Mikel received many positive comments for his performance in the match.

Even though he started out as an attacking midfielder, the Portuguese manager was quick to reshape Mikel into a holding midfielder cast in the mould of Chelsea great Claude Makalele. 10 years on, Mikel has served Chelsea in the holding midfield role.

The club’s website on Mikel’s summary page wrote thus, ‘‘Despite the presence in our squad of arguably the greatest holding midfielder of all time, Claude Makelele, Mikel still made over 40 appearances in his first season at Stamford Bridge, and he has maintained a high level of consistency throughout his Chelsea career.’‘

Sometime during the ‘second coming’ of José Mourinho, there were strong reservations about his lifestyle outside of Stamford Bridge, and the club were reportedly considering offloading the player. Deals were announced but never materialized.

In his ten years stay with Chelsea he has won all available domestic club trophies including the Europa League and the prestigious UEFA Champions League. The only continental club trophies to have eluded him are the UEFA Super Cup and FIFA club World Cup.

He has worked with a handful of managers since joining, he played twice under Jose Mourinho, twice under Guus Hiddink as caretaker, Israeli Avram Grant (also as caretaker after Mourinho’s first exit).

He also served under Roberto De Matteo (as cartaker and substantive manager), he was around during Andre Villas Boas’ tenure, during Luis Felipe Scolari and Italian Carlo Anchelloti.

At the national team level, Mikel has played 75 games for the Super Eagles and currently is captain of the team, he has four goals to his credit and was part of the triumphant team that won the AFCON 2004 in South Africa under the late Stephen Keshi.