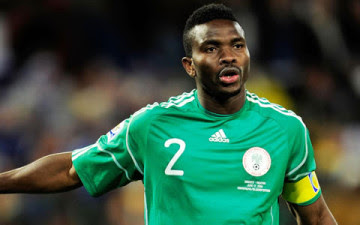 Former Super Eagles captain, Joseph Yobo, is set to add glamour to the Nigeria League, following an announcement by the League Management Company, LMC, on Tuesday that the 35-year-old will play the last 12 games of the season in the Nigeria Professional Football League, NPFL.

The LMC, through its official twitter handle, said Yobo had been signed on as League Ambassador and would soon be assigned to one of the four clubs already bidding for his services.

“Joseph Yobo to play last 12 #NPFL games this season as League Ambassador signed on by the LMC,” one of the tweets from the custodians of the Nigeria League read.

The LMC assured that Yobo will soon be assigned to a club under the NPFL Elite Players Scheme which Sani Kaita benefited from two seasons ago.

Yobo started his football career on the home front almost two decades ago with Michelin FC in Port Harcourt.

He went on to feature for teams in Belgium, France, England and Turkey.

His stint with Premier League side, Everton, where he was the first signing made by David Moyes, was one of the highpoints of his club career.

The NPFL Elite Players Scheme was introduced by the LMC since 2014 season to inject Nigerian players with specified national team caps as part of strategies to rekindle greater following for the domestic league as well as attract sponsors to the clubs.

Only Enyimba, which signed on ex-Eagles defender, Sani Keita, has so far explored the scheme.