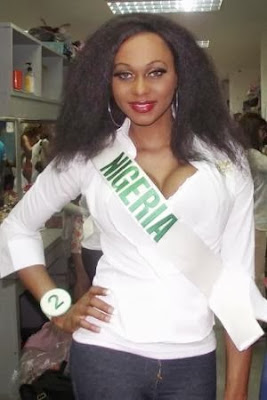 Miss SaHHara was born in the wrong country, and in the wrong body. Repression in her native Nigeria almost drove her to suicide, but this weekend she was cruising down the runway in a cream dress – one of several finalists at the Miss Trans Star International beauty pageant in Barcelona, Europe’s main such event. Set up in 2010 in the Spanish Mediterranean seaside city, the fifth edition of the contest this weekend crowned Brazil’s Rafaela Manfrini as this year’s transsexual queen, although winning was secondary for participants who have often experienced discrimination and repression.

“Here all of us are winners already, we won our life,” said runner-up Tallen Abu Hanna from Israel. Persecuted by their governments, victims of discrimination or rejected by their own families, many of the 25 candidates went through hell and high water before summoning up the courage to strut their stuff in swimsuits or evening gowns. “This is an attempt to engage society,” said Thara Wells, the contest founder. “We want to go beyond beauty and tell the life story of each girl.”

Among the candidates were transsexuals from Japan, South Africa, Colombia, Turkey, and Nigeria, whose activist chat stood out. Sporting a cream dress with a plunging neckline, Miss SaHHara glided down the runway without a hint of shyness, drawing in the 300-strong audience with her light-green eyes. Nothing much remained from the young 19-year-old man who fled Nigeria for London more than a decade ago. “I had severe disphoria.

My breasts weren’t growing, I didn’t have a vagina, I looked at myself in the mirror and I did not feel comfortable with my body,” she told AFP before the gala final Saturday. Miss SaHHara, as she is known, always knew she was a woman. She would put on make-up and wear her mother’s high heels. But in Nigeria, where homosexuality and transsexuality are illegal and punishable by 14 years in jail, her situation was tough. “In the street, they were always attacking me, harassing me,” she said. “I came back home and my family would harass me, they said ‘you’re wrong, you need to change, act like a man’.”

She twice attempted suicide and says she was imprisoned in Nigeria for wearing women’s attire before escaping to London, first as an illegal migrant, then as a refugee. “There was no way I could have survived in Nigeria, this is why I had to leave,” she said. In Britain, she underwent surgery to become a woman with long, curly blond hair, big breasts and full lips.

She works as a model and singer, and also manages her own NGO to help transsexuals. “London gave me the opportunity to pursue my dreams and be my true self,” she said. “I’m hoping that by speaking out and coming to Miss Star, I will try to influence people or perhaps influence my government to revoke 14 years imprisonment for LGBT inNigeria.”

In recent years, lesbian, gay, bisexual, and transgender people have scored small victories around the world. Nepal, Argentina, Bolivia and Ireland are just some of the countries to have approved laws recognising transgender people and the United States is considering allowing them into the army. But there is still a lot to do. LGBT people are still persecuted in some 80 countries, and more than 2,000 transsexuals have been murdered since 2006, according to the Trans Murder Monitoring Project, part of the Berlin-based Transgender Europe NGO. “We have very few opportunities in life, very few,” said contest founder Wells. Israel’s Tallen Abu Hanna concurred, saying transsexuals have huge difficulties in finding jobs. “In the end, lots of them have to have sex for money.”

She has been lucky though

A Christian Arab Israeli, she has become a celebrity since winning a transsexual beauty pageant in her country, and wants to take advantage of this fame to inspire Arab people, who like she once did may feel trapped “inside a cage.” “I became a woman and I found peace between my body and my soul.”