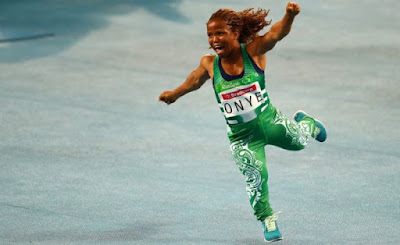 When Lauritta Onye threw a shot put 8.40m she not only won gold but broke a word record.
The Nigerian Paralympic gold medallist is also known as…. Laury White.
Under that name she starred in the Nollywood film Lords of Money in 2015.


Her performance skills were put to good use on Sunday night when she celebrated her victory in acrobatic style in front of the cameras.

That's compared to Nigeria's Olympic team which only took home one bronze for football last month.

At the half-way point Nigeria's Paralympic team is 10th in the medal table and top among African countries, whereas the Olympians were joint 78th by the end.

Before this Games, the former director of the National Sports Commission went as far as to say that he hoped the Paralympians would "erase the shame of the dismal showing at the Olympic Games".

Weightlifter Lucy Ejike broke a world record on Sunday to win gold with a lift of 142kg in the women's under-61kg event.

It is the third time she has broken a world record - in Beijing in 2008 she broke two during the under-48kg event. The 38-year-old wheelchair user has won three gold medals since she started competing in 2000.

Only one of Nigeria's nine medals is not in powerlifting - so far it has five Paralympic powerlifting golds, two silvers and one bronze.

That's added to 15 other powerlifting gold medals since Nigeria started competing in 1992.

But then the numbers are against the other Paralympians - 14 of the 23 Nigerian competitors are powerlifters. This doesn't appear to be by accident.

After the powerlifters came back from the 2012 Paralympics with 12 medals the then Sports Minister Bolaji Abdullahi told the UK's Guardian paper that Nigeria would just put money into a few sports where they have a comparative advantage.