Amokachi wants his twin sons to play for Nigeria 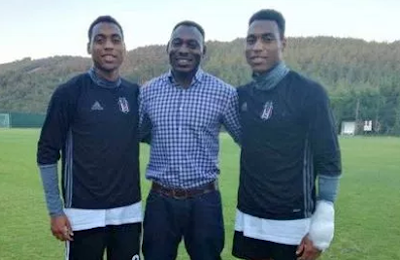 Former Super Eagles striker, Daniel Amokachi who declared himself Super Eagles number one fan still has that patriotic zeal running in his veins like in the days he played for Nigeria.

The USA ’94, France ’98 and Korea-Japan 2002 World Cup star has said he would want to see his twin sons follow the path he has threaded, by playing for Nigeria, instead of Tunisia, the country of their mother. Amokachi, fondly called Da Bull in his active days said, “Definitely, that would be my dream, their mother’s dream, even their dream because their heart is with Nigeria.”

He informed that the boys had turned down the opportunity to be capped by Tunisia, but remains hopeful that call will come up for them to play for Nigeria. “They are doing pretty well in Besiktas, they are with the U23 team, we are trying to see if they can play the professional angle of it because, in Turkey, they leave the foreign slot for professionals.

Right now, however, they are working very hard and we hope that soon, they will get the opportunity to play in a place where they can give a good account of themselves,” Amokachi said. He prayed that Super Eagles players who are World Cup bound should remain injury free in order to find themselves in good form before the tournament.

“Qualifying for the World Cup is one thing but the World Cup proper is a different ball game. The most important thing is that our players should be healthy and have enough playing time in their respective clubs because that will definitely tell when it comes to the World Cup. “I have confidence that this team can take us to the next level, like the quarter-final or even win the World Cup”.
Vanguard
Posted by Naijafeed at 2/19/2018