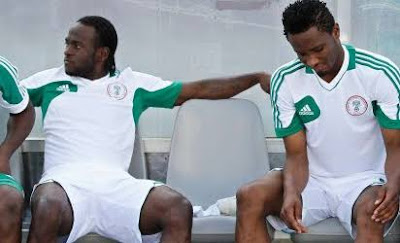 Obi currently plies his trade as a midfielder for Chinese club Tianjin TEDA.

The News Agency of Nigeria (NAN) reports that the awards in its 5th edition will hold later in the month in Lagos.

Fidelis Elechukwu of MFM FC, Gernot Rohr of Super Eagles and Kennedy Boboye of Plateau United were nominated for the Coach of the Year Award.

Lagos, Rivers and Delta were nominated for State with the Best Grassroots Development programme.

The President, Nigeria Pitch Award, Mr Shina Philips, said the awards had continued to grow to become a significant part of the football calendar in spite of challenges.

He noted that challenges such as securing sponsorship and partnership did not deterred the organisation’s resolve to make the awards an essential part of the nation’s football culture.

“The Nigeria Pitch Awards is a platform for recognising, rewarding and celebrating talented and industrious footballers and other stakeholders in Nigerian football.

“Since the introduction of the awards five years ago, it has continued to grow to become a significant and essential part of our football society,’’ he said.

Philips said that organising a credible and transparent reward system for Nigerian footballers and stakeholders would help youths to imbibe the culture of hard work, patriotism and honesty.

The president of the award added that he was grateful for all partners and all corporate bodies that had identified with the award since the project began.

“We thank the Federal Ministry of Sports and Nigeria Football Federation for their immense support.

“We thank SIAO Partners, Nigeria’s foremost accounting firm for being our independent vote collation body for displaying professionalism in the collation of results and the entire voting process.

“We are also buoyed by the responses we have received from sports journalists, Nigerian footballers and administrators,’’ he said.

Aisha Falode, Chairperson, Nigeria Women Football League congratulated the organisers of the award, saying that it would build the confidence of young people in the nation’s football.

“The Nigerian youths can be engaged through entertainment and sports with football being the most enticing when it comes to sports,’’ she said.

Falode urged sports journalists and stakeholders to support the award because of its credibility and assured that the awards get the necessary support to expand in scope.

Mr Buri Olugbami, an official of SIAO Partners, said that SIAO recognised the potential of football and its impact in providing youth development.

Olugbemi said that they would remain committed to all social and sport activities which would be strategic to youth development.