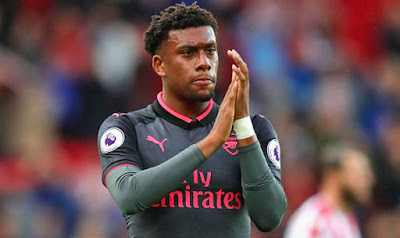 Nigeria and Arsenal's, Alex Iwobi, says Arsene Wenger's impending departure from the north London club after 22 years is both "sad" and "exciting".

Iwobi told BBC Sport that Wenger has been the cornerstone of his career.

"It's sad for me. He has been inspirational," the 22-year-old said.

"He has done a lot for me in a short time in my career so it's a bit sad but it is also exciting times. We don't know who is going to come in, we are just waiting."

Wenger announced last month that he will leave Arsenal at the end of the season.

Iwobi was speaking ahead of his team's Europa League second leg semi-final tie against Atletico Madrid in Spain, on Thursday.

He said he and his teammates would like to give Wenger a fitting send-off by winning the cup.

"He deserves the right send-off so we should end the season as strong as we can for him," he added.

"What he wants is for us to finish the season strong and try and win the Europa League. That's the best present we can try and give him."

The Gunners and Atletico Madrid played a 1-1 draw in the first leg at Emirates.

The final of the Europa League will be played in Lyon on May 16.