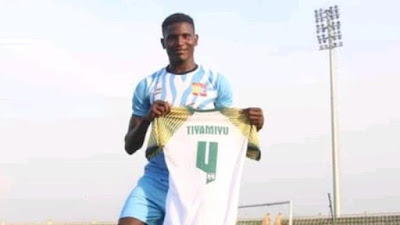 Nigeria mourned on Sunday the 'untimely death' of footballer Kazeem Tiyamiyu locally known as Kaka after he was knocked down and killed by a car in an apparent hit-and-run.

The 21-year-old, who played in defence for second tier side Remo Stars, was being detained by police in a vehicle before his death on Saturday in Sagamu, Ogun State, south-west Nigeria, according to his club.

The state police spokesperson, Abimbola Oyeyemi, confirmed in a statement that there is an order for the 'immediate arrest' of the officer for his "unprofessional act of leaving an arrested person alone in the vehicle".

"A full scale investigation into the case by the State Criminal Investigation and Intelligence Department has commenced," he added.

However, Remo Stars accused the police of heavy-handedness, alleging that the footballer was 'pushed out of the car, before he was hit by the unknown car'.

Top officials said the club and late footballer's immediate family are inconsolable at what has happened and have called for a full scale investigation.

"We urge the police to conduct a proper investigation into this heartbreaking death of our player," club general secretary Michael Onikute told BBC Sport.

The Nigeria Football Federation (NFF) said in a statement it was saddened and in shock by the circumstances that led to Tiamiyu's death.

The statement said: "We are particularly sad about the reported circumstances of the player's death, as attested to by a team mate who was with him at the time, to the effect that he was arrested by officers of the Special Anti-Robbery Squad (SARS) on the claim of wearing military apparel, and was pushed down from a moving vehicle before being crushed by another vehicle.

"The loss of a promising talent who could have developed to a national and international star giving his humility, hard work, discipline and professionalism as attested to by his team mates."

The latest incident comes four years after another footballer, Izu Joseph, was hit by a stray bullet when gunmen attacked a market in his hometown of Okaki in Rivers State.

Nigeria international John Ogu indicated that he wants an end to the tragedies by tweeting: "This has to stop. That was how a player was killed some years back playing in our local league."

Police in Nigeria have always come under the spotlight and the authority was forced into an immediate re-organisation of the anti-robbery unit in December 2017, after a social media outcry over alleged police brutality.